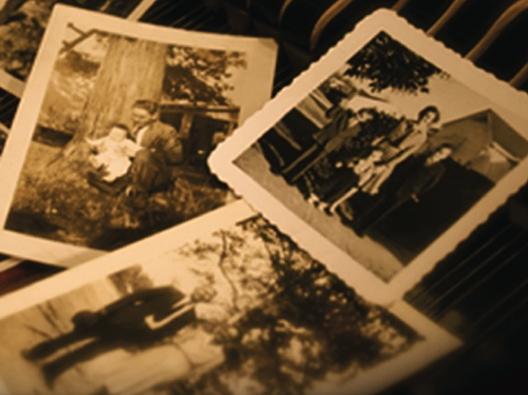 I don't think about home much anymore, and yet I always do. The pictures are faded, but they show up somehow almost every day, like a flashbulb that snaps, leaving a warm amber glow that lingers, then disappears.

I think about home most of all at this time of the year. It's most likely age, but holidays are just "days" now; time off from work. Those questions people like to ask when they don't know what to ask -- what's your favorite color? Favorite TV show? I don't know; ask me tomorrow and I'll most likely have a different answer.

The Fourth of July is when I miss Mom and Dad the most. It's not as if our family had some written script we followed on Independence Day, but we had traditions. We would gather the kids and drive to Mom and Dad's place early that morning. Mom would be in the kitchen, slicing boiled potatoes into a big bowl for her potato salad, jangling baking pans from out of the low cupboard, tipping open the oven door to check on her cherry pie; Dad would be in his recliner sipping black coffee, jazzed and waiting for everyone to arrive so we could drive over to Mandan and stake out a prime viewing spot for the parade. Kids of varying sizes would tumble about, antsy for the real fun that would come later -- firing up those punks so they could sizzle off their fountain cones and bottle rockets in the middle of the street. Mom never attended the parade, but the rest of us did -- we locals and whichever far-flung sisters happened to travel home to enjoy the holiday that year.

Our prime spot was the Mandan McDonald's -- my sister-in-law worked there and we'd all pile in and push our way through the throng to buy a ham and cheese biscuit that we didn't really want, but we figured we needed to eat something. All the tables were long occupied, so we hovered and waited, and then sat down for approximately five minutes before heading outdoors to sit on the curb, everyone excited, yet playing it cool, waiting for the parade to start.

Mandan has an absurdly long Main Street, ripe for marching bands and cheesy floats -- a polka band riding by, pumping out a German tune on their accordions and snare drum, their butts parked precariously atop metal folding chairs. The Viet Nam Veterans of America marched past in a ragged formation and we all stood up and silently saluted. A clown whose makeup was melting in the hot sun paced down our side of the street and hefted candy out of a plastic pail, and the little kids darted out and scooped up as much as their hands could hold, while my sister and I tried to herd them back before the horse cavalry clomped them. The Mandan High School marching band with their uniforms of black and white came by, and I stood up and hooted and clapped -- my alma mater after all. The farm implements. Dad would be standing with my brothers behind my sister and me and would invariably say, "I had one of those." It became our running joke. "How about that one, Dad? Did you have one of those, too?" My sister and I snapped pictures of anything that struck our fancy, and of each other.

When the parade ended, we'd hike the mile or so over to where Dad's Lincoln was parked (last open spot!) and then wait our requisite half hour behind all the other cars revving up to go home.

Back at Mom and Dad's, Mom was cool as a cucumber in her air-conditioned living room, while the rest of us were dripping sweat and dying for a cool drink. Mom was no fool.

The guys would invariably stretch out on the couch or floor or whatever was available and snooze. Men seem to have some sort of switch that allows them to float into semi-consciousness anytime the mood strikes. We, on the other hand, were busy corralling our kids away from their most recent dangerous bright idea (ours was a family of boys).

Mom's potato salad and macaroni salad and hamburgers freshly sizzled off the grill were excellent, and we went back for seconds and thirds and topped it all off with a slice of cherry lattice pie.

As darkness fell, we settled on the concrete stoop with cups of coffee and watched the kids dart in and out of the street, setting off their booty of fireworks; the grown men unable to resist the lure; bounding out to "supervise".

The air was warm. Sometimes lightning would flash in the west, but it was far away and it only added a light touch of danger to an already electric night.

When all that was left was the soft scent of sulfur in the night air, we'd start to gather our things and linger for a final goodnight.

On the drive home, the kids fell asleep stretched across the back seat, their breath puffing like sated kittens.

We'd carry them off to their beds and I'd settle outside on the step for one final smoke.

I didn't know that feeling wouldn't last forever. I never gave it one solitary thought.

Now I do, when July rolls around. Remembering makes my heart hurt; makes me miss them more.