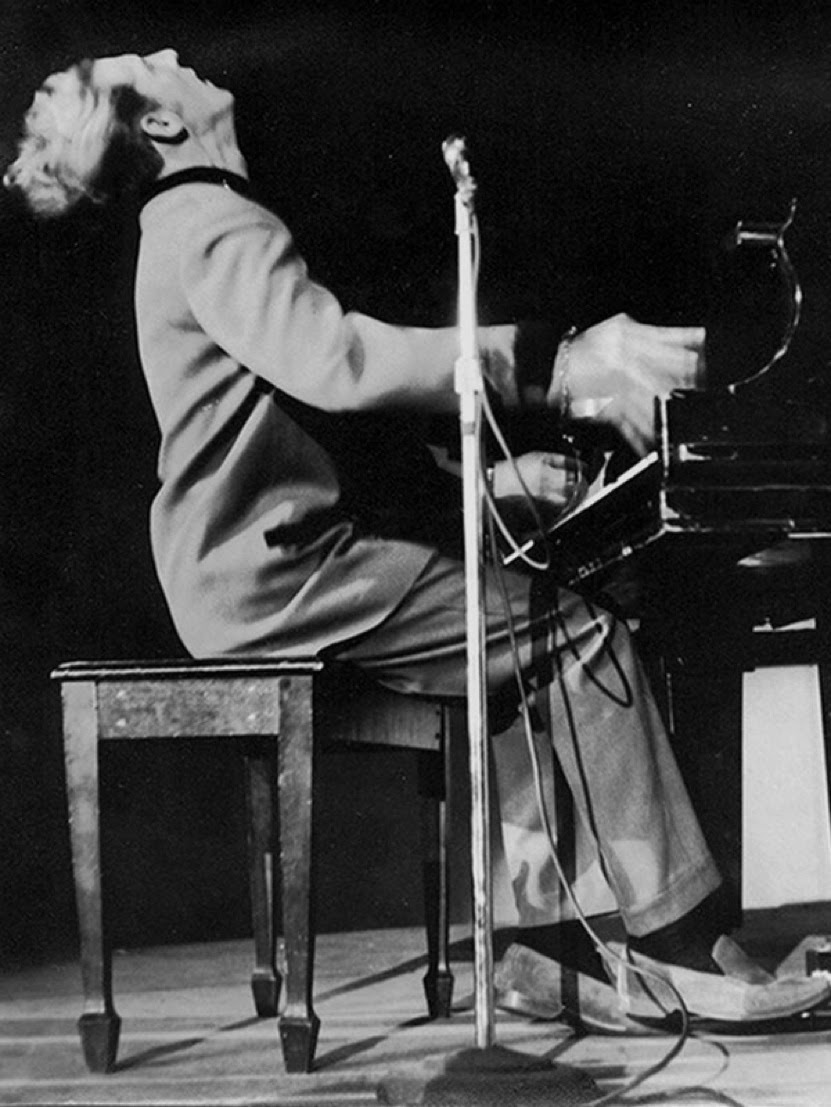 We were watching a pretty bad HBO show last weekend that shall remain nameless, but my better half bought the DVD, so now we kind of have to continue watching or else watch our pennies dribble down the drain. The show is about rock and roll (sort of, but sadly, not enough about rock and roll), so we both thought, how could we go wrong? The storyline is crappy, but the show does contain snippets of actors re-enacting classic rock performances, as various characters have some kind of nervous breakdown (it's hard to explain) and conjure these images up subconsciously. (One scene has a facsimile of Karen Carpenter riding in the passenger seat of a car, singing...I forget...one of the Carpenters' hits. But you get my drift.)

One scene that caught my attention as I was drifting off to sleep out of utter boredom was an actor doing a pale impression of Jerry Lee Lewis performing "Breathless". This roused me out of my near-slumber.

My immediate thought was, this is delicious music. Delicious music differs from other music types. Delicious music is difficult to explain. Heavenly music is Roy Orbison. Stab-you-in-the-gut music is Bruce Springsteen and the E Street Band. Tipsy, fuck-you-if-you-don't-get-it-and-ask-me-if-I-care music is Dwight Yoakam.

Delicious music? It's a little bit dangerous, but we don't know exactly why. It's dangerous even though it was performed almost sixty years ago and we're so much more sophisticated now. It's dangerous like Elvis was supposedly dangerous, but maybe you had to be there, because Elvis, to me, is a guy singing about how he wants to be my teddy bear. That's akin to Richard Simmons asking me if he can be my ice cream cone.

Watch and tell me if this is not dangerous:


I may need to rethink the 1950's. Apparently it wasn't all Perry Como. There was something going on, something subversive. I should ask my older sister about that.

I wanted to include something else that was dangerous (i.e., delicious) to round out this post, but I can't come up with anything comparable to Jerry Lee. I don't think there is anyone comparable.

Even when Jerry Lee transitioned to country music, he had "attitude". That isn't fake-able Either you have it in you or you don't.

Instead, I thought I'd feature a bit more of HIM:

Some people are welded to the times they grew up in. I'm like that, mostly. I idolize John Lennon -- I mostly think there is no one better. My husband will barely acknowledge anyone who appeared on the scene prior to 1966.

I'm not a child of the fifties, but credit is due where it's due. I can't say that I remember Jerry Lee when his locks were golden -- I was barely a toddler then -- but I kind of wish I did.

Because hindsight isn't near as much fun.