Things My Mom Taught Me 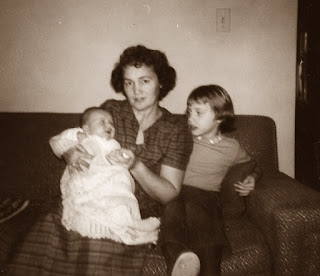 My mom's been gone now for more than fifteen years. It doesn't seem that long. Occasionally I dream about her, but in my dreams she's always passing me by, on her way somewhere. She never stops to talk. If she did stop, I don't know what we'd talk about anyway.

My mom grew up during the Great Depression. She was a severe woman, who only knew hard work. Mom was never sentimental. There was too much to do. When I was little and still hanging around the house, she didn't converse with me in the course of her household duties. I was just there, someone to vacuum around. I was never much of a talker anyway, so it didn't bother me. Moms didn't really talk to their kids back then, so my life wasn't a novelty. I lived inside my head and maybe she did, too; or else she was mentally ticking off her list of chores.

Really, that's what I remember most about my mom from my earliest memory until around age ten -- she worked. She cooked and baked and got down on her hands and knees and scrubbed the kitchen floor; then squirted Klear floor wax on the linoleum and swiped it around with a sponge mop. She canned green beans and beets and she made jam. She weeded her huge garden and ran out with plastic pails when frost was in the forecast and plopped them atop the tender plants. She drove the grain truck alongside my dad's combine in harvest season. She made supper at ten o'clock at night for my dad and brother, after they'd come in, black-faced, from the fields; she squeezed wet clothes through her Maytag wringer washing machine in the basement, then hauled them up the creaky basement steps and pinned them on the clothesline. She ironed, even the sheets. She got pregnant, twice more, and still didn't slow down. Sunday picnics were no picnic for her. While the men sat in the shade of a cottonwood bullshitting and guzzling Grain Belt, she was in the hot kitchen pulling pies from the oven and boiling potatoes for potato salad. My aunts kibitzed with her and helped where they could. Any self-respecting housewife would not find herself outside lazing with the men, kicking back, puffing on a smoke. Women had defined roles and men had theirs. Weekdays, the high point of Mom's afternoon was sitting down at 12:30 to snatch a few minutes of As The World Turns.

Mom didn't have time or use for dreams.

She bore three babies long before I came along, most likely not a joyous surprise, and turned me over to my older sisters, who toted me around like a bald-headed baby doll. But, by the time I was eight, my sisters had moved out and we had two new babes in our household. I was self-sufficient. I colored and I played my record player upstairs in my bedroom. I was not Mom's helper in any sense of the word, although eventually I needed money of my own to purchase '45 records, so she made a deal with me: I'd get twenty-five cents a week for dusting the furniture and performing other non-taxing chores. I begrudgingly performed those tasks as seldom as I could get away with, but she forked over that quarter every Saturday, well aware I hadn't held up my end of the bargain. I was as lazy as Mom was hard-working.

My eventual role within the family unit was that of the "novelty". I had a tiny bit of musical aptitude and I was good at memorizing. Thus, I got to take music lessons and I brought home straight A's on my report cards. My teachers had me (and Mom) convinced I possessed a superior intellect. Only in hindsight do I realize that it was all a trick. I just remembered things well, plus my big sister had taught me how to read at age four, so I was miles ahead of everyone else in my class.

Although Mom didn't spend any quality time with me, she did teach me some lessons:

I don't think I was even in kindergarten yet when I accompanied Mom to the corner grocery store - Nellie's. There were no supermarkets then; simply little stores that held everything a late fifties housewife would need. One Saturday, as Mom was writing out her check for twenty-one dollars to pay for a package of frozen fish sticks, a four-roll pack of Charmin, two loaves of white bread, a can of cherry pie filling, and various other odds and ends, I spied the candy bars on a shelf below the counter. I wanted one...or two...so I took them. Rhodes scholar that I was, ensconced in the back seat of our Mercury, I commenced to chomping on one. Mom glanced back and was aghast. "Where did you get that?" she demanded. I had no plausible response."You're marching back inside and telling Nellie you stole them," she directed. She fished inside her purse and pulled out a couple of dimes, clamped them inside my tiny palm and pointed toward Nellie's front door. "I...stole these," I stammered, quivering in the presence of the aproned matron behind the register. I don't remember what Nellie said to me, but I remember my mortification. That summer Saturday was the first and last time I ever stole anything, ever.

Throughout my adolescence, I gave my mom many opportunities to be embarrassed. My cousins and I had a little trio, borne of our shared music lessons, and we did appearances at nursing homes and parades and park band shells. I was a natural ham, so I became rather effusive during those performances. Until I spied Mom in the audience scowling at me, disapproval reddening her cheeks. So, I swallowed my show-off gene and retreated into the background; turned translucent, only my alto warble betraying my presence on the stage. You can be good, but don't let anyone know you think you're good, was Mom's message. To this day, I rein myself in when I sense I've gone too far. I self-censor. Because Mom told me to.

3. Keep your cards close to the vest.

I'm not sure Mom ever proffered an opinion in polite company. She was a master at gauging the room. She agreed with whatever sentiment dominated, offering an "I agree" or an "uh huh", to keep the conversation flowing. Oh, she had opinions - definite opinions - but those she saved for home. My lesson: Don't say what you're really thinking, because people will judge you; judge you harshly, and who needs that kind of grief? As I've grown older, I've forgotten that admonition a few too many times, and forgetting has not served me well.

As Mom grew older, she relaxed a bit. She never once stopped cooking and baking and cleaning, even when she could afford to hire someone to do those things for her. She either liked doing those things or they were so ingrained, she knew no other way of living.

In Mom's last years of life, she became someone I'd never before known -- a supportive mother. She and I did a few things together -- went to concerts, played bingo. After I moved out of state, she wrote me chatty letters. I would have liked to get to know this New Mom better, but time ran out. Maybe that's why I dream about her sometimes. I'm still yearning to get to know her, but she just breezes past me; signaling that she's someone who can't be known.

I never even knew that she loved music until she was in her later years. We could have shared that, but she kept it inside her. Close to the vest.

She was a good woman. She did the best she could.

That's all any of us can do.

Email ThisBlogThis!Share to TwitterShare to FacebookShare to Pinterest
Labels: mother's day, things my mother taught me