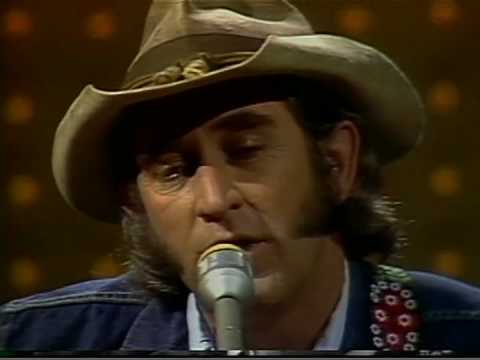 Readers of this blog know that the nineteen seventies were not my favorite musical era. Regardless, the seventies were rather a momentous time of my life. I graduated from high school, got my first "real" job, got married, and most of all, gave birth to both of my children. It's unfortunate that my soundtrack of the decade is so lackluster.

Don Williams was one of those singers who was always "there" -- there on the radio, there occasionally on '45's. In the world of country music in the seventies, Don Williams was an anomaly. I like my music kickin'. Number one on my list is a good beat. Add to that some two-part harmony. Fiddles are always good, steel guitar is a given. I love a good piano. Those things were not, for the most part, present in the country music of the decade. I wasn't a big acoustic fan. Willie's "Blue Eyes Cryin' In The Rain" was okay. I didn't rush right out to buy the single.

Then there was Don Williams.

Before Waylon ever got hold of it, Don recorded this song. And to me, it's the superior version:


Don was like your favorite uncle -- not the loud, brash one who was too fond of hugs; but the quiet one you ran to when you skinned your knee, because he'd soothe you; dry your tears.


I think I purchased a total of two singles by Don Williams in my life. It wasn't that I didn't like him or that I didn't have eighty-nine cents to spend. Unlike my mom, however, I didn't pick up a '45 just because it was listed on the chart pasted to the end cap of the Woolworth's aisle. I was choosy. I was never one to buy mass quantities of music just because. Perhaps it was a holdover from my days as a girl when singles cost an insane one dollar and it took me a couple of months to save up that much money. My choice was thus very important. I had to be particular. I guess that's why Don got beaten out by others, even when my monetary circumstances became less dire.

The first version of "Tulsa Time" I heard was the one recorded by Don Williams. It was a departure for him -- a song with an actual beat! Later I heard the Eric Clapton recording and thought, wow, am I lame -- it's an Eric Clapton song! Actually, it wasn't. Don recorded it first. Eric liked Don Williams so much, he decided to do his own rendition.

That was the first Don Williams single I purchased.

As the nineteen seventies faded away, never to be remembered for anything musically other than disco and Urban Cowboy, Don recorded my favorite, and the second Williams single I plunked down my pennies for:

Looking back, there's something to be said for the quiet music. I wish I could say that in my old age I've become a fan of Mantovani, but I still like a good beat. Nevertheless, I have learned to appreciate each song for what it is and to find value..and yes, warmth, in Don Williams' music.

Rest in peace, Don Williams. Thank you for being our favorite uncle.

Email ThisBlogThis!Share to TwitterShare to FacebookShare to Pinterest
Labels: amanda, don williams, goodbyes, i believe in you, tulsa time