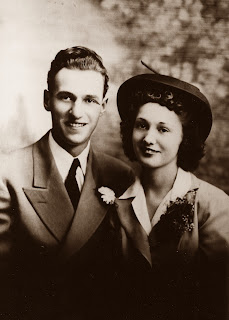 In the summer of 1993 my mom and dad's fiftieth wedding anniversary was approaching. Clever as us six kids were, we determined we would surprise them with a secret party. I don't remember who first came up with the idea, but those of us who didn't live far away grabbed the reins of mega-party planning. It wasn't to be a big blowout -- just immediate family, which by that time included grandkids as well. Mom and Dad's brothers and sisters were far-flung, and we weren't about to impose upon them to travel (at their advanced age) the six hundred or so miles to the scene of a party they hardly cared about, because they had their own milestones to celebrate. Besides, we much preferred intimate gatherings. My two sisters who lived in Texas readily came on board. They agreed to show up "unexpectedly" for an impromptu visit. We arranged for a limo to pick up Dad and Mom to chauffeur them to the restaurant that we'd booked for their special dinner.

I'm a pretty good organizer, and I'm a girl, which immediately deemed me one of the head planners. In actuality, my sister Rosie did the majority of the legwork. My older brother and my little brother no doubt had responsibilities, but I can't imagine or remember what those might have been.

For no logical reason, I decided I would be in charge of the "background" music for the dinner. This task I took very, very seriously. I apparently imagined that someone would actually care (no one did). I would do it again if the opportunity presented itself. Because that's what I do. I am the "music person" of the family. That's my role.

Compiling fifty years of music of someone else's life is not an easy task. And it's rather presumptuous. I can't imagine that anyone could sum up fifty years of my life -- and I know they couldn't. How would they know which songs meant anything to me? It would be such an eclectic list.

However, I researched and scoured lists of music from all the decades. I went to Musicland (yes, it still existed then) and bought CD's that I needed in order to secure my masterpiece.

I had no idea whether this song meant anything to my parents, but if one thinks "forties", what else would they think but:

The sixties were relatively easier. After all, I had this to fall back on:

Truly, I have no recollection of what I included for the seventies and the eighties. I'm sure, however, that it was awesome.

This, however, is the one that gets me every time:

This song was the coup de grâce of my two-tape set. It summed up everything -- fifty years of happiness and heartache. I don't think anyone noticed or heard it that night, but I knew it was there. It was a tough one for me, because I'd witnessed it all when none of the other kids in my family had. I remembered everything. It's easy to gloss over the hard times when one doesn't have to live them. But optimist that I am, I still believed in happy endings. My mom and dad had one that night -- August nineteenth, nineteen ninety-three.

When my mom passed away, my brother told all of us to take something that had meaning to us. I claimed that two-set cassette tape. I'd poured my heart into the making of it. Those amber ribbons were the only way I knew how to say, "I love you" to two people who were supremely complicated, but who shaped everything that I am.

I'm happy I did what I did for them, on their fiftieth year.

I did what I knew how to do.