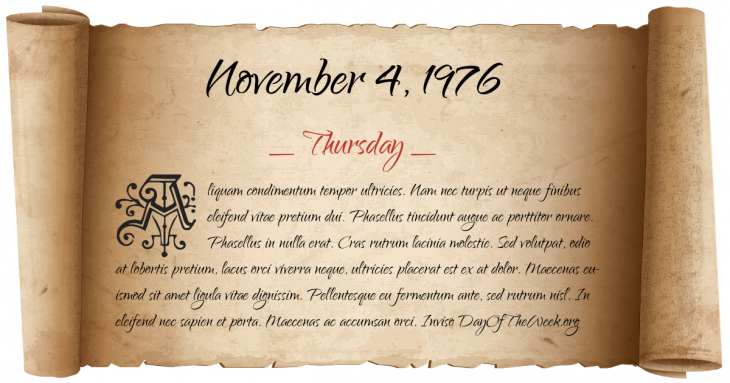 1976 was a fun year in pop culture, if fun means cringingly awful. In fashion, women wore patchwork denim ensembles -- pantsuits, vests with skirts (what I will call the Little House on the Prairie look) -- while polyester leisure suits were de rigueur for men, complete with heavy gold chains (or "necklaces") and slippery patterned shirts with deep v-necks; visible chest hair required.

The top movies of the year included Rocky, One Flew Over The Cuckoo's Nest, All The President's Men, and Taxi Driver; only two of which I've ever seen, and one I only managed to catch for the first time sometime in 2016 (I won't say which one, but are you talkin' to me? You talkin' to me?)

In TV, we were diligent about not missing M*A*S*H and the Bob Newhart Show. ABC had a hit comedy that featured a real cutie. His character's name was Vinnie Barbarino. I wonder whatever happened to that actor. Fonzie was still saying, "Aaaayyyy" and weren't weren't yet sick of it. Most of the so-called comedies had terrible writing, but what were we gonna do? Sit in the dark and listen to Captain and Tennille on the radio? At least Johnny Carson showcased some new comics once in a while. George Carlin, of course, was my favorite, but I also loved Robert Klein and David Steinberg. And there was no one bigger than David Brenner (oddly).

On Tuesday, November 2, I waddled into the Jeannette Myhre gymnasium, nine months pregnant, to cast my very first vote for President of the United States. I wasn't in love with Gerald Ford -- he was kind of hapless, really; but shoot, that peanut farmer? That grinning sanctimonious schoolmaster? No thanks. I had a bad feeling about that guy, and I, of course, turned out to be right. I would have to endure four years of economic hell before somebody special came along and saved the country. I don't think I've yet fully recovered from the financial setback Mr. Peanut thrust upon me.

On the late morning of Thursday, November 4, I came home from work (yes, I started work early and got off early), made myself my usual tomato sandwich on toast, sliced a couple strips of Colby cheese and settled at the spindly kitchen table to enjoy my lunch. I'd eaten exactly the same lunch for nine months. Pregnant women get a free pass for weird food cravings. Today I have no excuse, but I really don't need one. I'd informed Mom and Dad that since I was pregnant, I would no longer be their room-cleaning mule, and I demanded a front office job. It was the very first (and only) time they were taken aback by a demand from me, but to be honest, I'd never before made any demands -- I was too conditioned and too frightened.

I settled in to watch Days of Our Lives. Doug and Julie continued to be in love; and, of course, Dr. Marlena Evans was my very favorite.

Around 1:30 I felt a pinch in my tummy. I'd felt phantom twinges before; but then again, I was three days overdue...

By the time water gushed out of embarrassing places, I figured things were happening. I hesitated to call my doctor, because I really didn't want to trouble him for a false alarm, and frankly, I had no clue how this whole dance was supposed to go.

I didn't call anybody. I didn't call my husband. I sure didn't call my mom. Now, in 2017, I'm better about asking for help; but I was a balled-up mess in 1976; afraid to let people know what I didn't know. That came from no one ever wanting to help and everybody expecting me to just "handle things". It came from being the grownup to a couple of "parents" who forgot to grow up.

By the time my husband showed up around 5:00 p.m., I said "maybe we should think about going to the hospital"; hoping I wasn't about to inconvenience any of the hospital staff with a false alarm. Shoot, I could have had my baby at home, in my bed, if I hadn't summoned the courage to take a chance that maybe this was the real thing.

Baby Christopher was born at 10:19 that night. A seven-pound-six ounce baby boy with a full head of blonde hair.

I don't know if my mom ever thought about the music on her radio in 1955. I doubt it. But I'm a music geek, so I was thinking today about the songs that came out of my home speakers and my car radio that year.

This band should have a coffeehouse named after them:

Randy Meisner, what the heck happened to you? I don't care. This is the most enduring song from 1976:

Sorry, you don't get away from your mom's country that easily:


Oh, look! Vinnie Barbarino has made another appearance! Chris, if you want to know anything about the seventies, you need to know about the Bee Gees:

And if you ever care to know what kind of music your mom liked in 1976, here's a representation:

I could go on, but you're forty-one now and your patience with kitschy music is probably waning.

I have to say, though, as your mom, I like reminiscing.

Years are like a leaf in the breeze. Once I was a kid, much younger than you are now, and I knew exactly what I wanted my son to be.

I hope those things maybe contributed somehow to the man you are today.

I think they did.