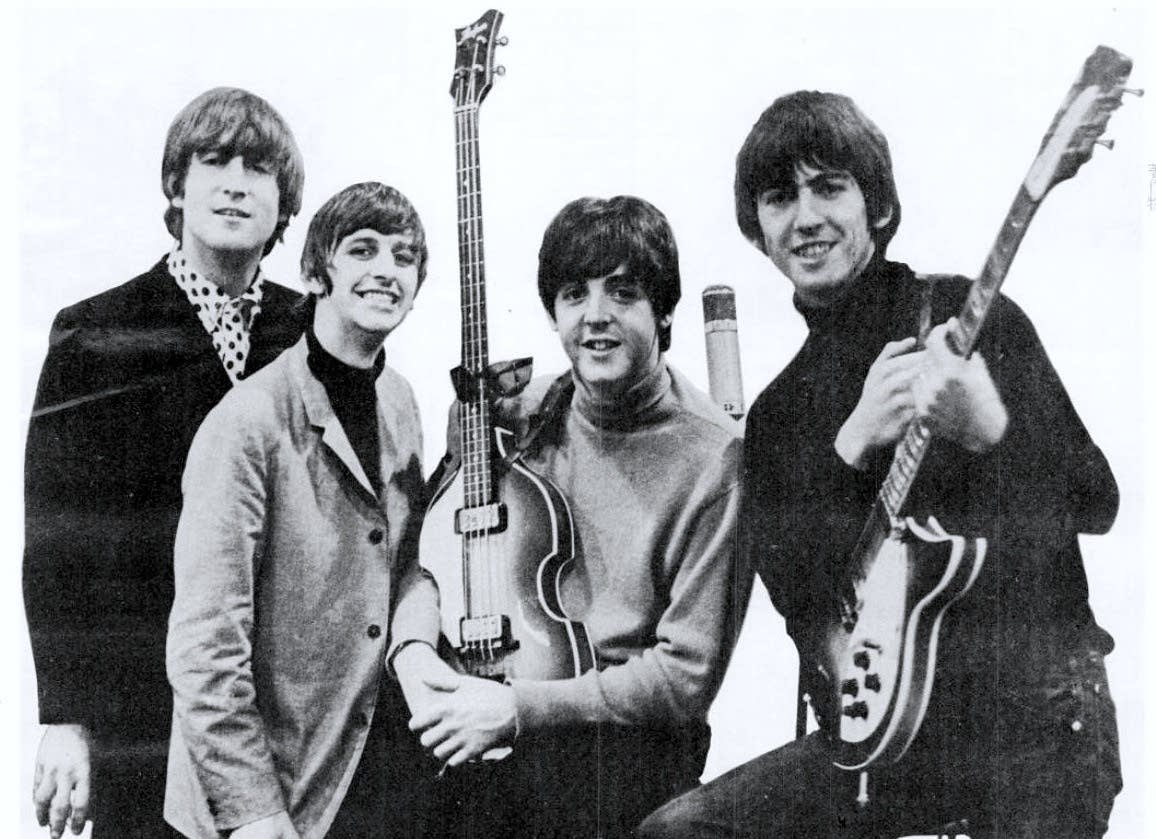 I didn't begin to put it all together until I was around age nine. At nine I saw Manfred Mann and most importantly, Roy Orbison, on TV for the first time. "Oh, Pretty Woman" was the absolute, bar-none best song I'd ever heard in my whole life (to date).


And this song was profound (okay, not really), but I really, really liked it:

But I also lived in an apartment attached to a country-western bar, so I was confused. Buck Owens and Bobby Bare poured out of my uncle's juke box, while my little plastic table-side radio blasted out The Dave Clark Five and the Animals. I was warbling, "There goes my baby with someone new" as part of my little cousin trio. I had the Beatles, of course, tucked in my pocket. The Beatles were still my secret in 1964.

1964 was a Pop Rocks explosion of music. Once I moved back home to the farm, I had Shindig on ABC TV, where I saw the Righteous Brothers and Gerry and the Pacemakers and the Beach Boys. And I had my big brother -- the supreme arbiter of musical taste.

It wasn't until 1965, though, that it all became clear to me. In addition to my brother, I had a best friend who I discovered music with. I can't emphasize enough how important it is to discover music with somebody who shares your sensibilities. My brother was an expert, but my friend Cathy heard the same songs at the exact same time I did, and we reveled in our shared awe.

Music was joyous in 1965. Maybe it was partly me, but I really think the music was buoyant. It was a musical renaissance. Sort of like today's sensibilities, the music before '65 had been all message-driven. It wanted us to think (think!) about things. I blame Bob Dylan. I was too young to think! Think about what? I didn't even know what the heck the folkies were complaining about. But they sure were bitchy. That wasn't music to me. Music was supposed to be fun. That's why they were called "songs"; not "dissertations". Even today, I hate, hate when people try to preach to me. "The answer is blowin' in the wind". Okay, well, blow away, dammit! Leave me the F alone!

And there were the songs that made no sense, and that was the point, A guy from Dallas, Texas, named Domingo Samudio could dress as an Arab sheik and do something like this:

I frankly thought "Sloopy" was an unattractive name for a girl. It sounded like "Sloppy", or like someone who dribbled a lot.

I wonder whatever happened to the McCoys. (I used to do The Jerk, too. Didn't everybody?)

I never could figure out why Sonny Bono dressed like Fred Flintstone. It was a fashion choice, yes, but not necessarily a wise one. I half-expected him to scuttle away in a car that was powered by his fat bare toes. Nevertheless, who hasn't attempted this song on karaoke night?

I never could quite get into the Rolling Stones. That still holds true today. I have honestly tried -- honestly. I want to like them. My husband reveres them. They just don't do it for me.

My recollection of this song is me standing outside in my circular driveway, holding my tiny transistor to my ear, and hearing a guy talking about someone smoking cigarettes, which I could relate to, because my dad smoked cigarettes. But other than that, ehh.

The Beach Boys were gods. Still are. I didn't know which one was Brian, or which one was Carl or Dennis, and it didn't matter. What mattered were those overly-tight white pants (just kidding! But not a wise fashion choice.) This track is notable due to the fact that they finally let Al Jardine sing lead. Of course, I didn't know that then. To me, the Beach Boys were the Beach Boys. I was not obsessed with who sang what. I still liked Little Deuce Coupe the best, although that was like a foreign language to me. I thought they were singing, "little do scoop". Which has nothing to do with this song:

Back to my brother:  He liked this song. I'd never heard the term "boondocks" before (or frankly, since). I remember pondering that word. I finally settled on "boondocks" equals "woods". I think that's wrong. But at ten, I pictured Billy Joe Royal singing about his life living inside a grove of trees. You be the judge:

My brother also had this single. He informed me that Gary Lewis was Jerry Lewis's son, like that was supposed to be a big selling point. I thought Jerry Lewis was a whiny overgrown child who was definitely not funny. There was an actual child in my household who was three years old and he was funnier than Jerry Lewis. I didn't actually mind Gary Lewis, but his entire recording was a fake, recorded by the Wrecking Crew, with even someone in the studio "helping" Gary with his vocals.

Of course, I didn't know that in 1965. I didn't even know, or think about, how records were made. I thought they appeared by magic. I had absolutely no conception of someone standing behind a mic in a studio. In my ten-year-old mind, a bunch of guys got together and sang. That was the entire process. It was like Elvis breaking into song on the beach -- no instruments; yet I heard them. No microphone -- his voice carried across the rolling waves with nothing but a trio of dancing "friends" behind him in the sand. It's sort of how food appears on one's plate. Somebody disappears behind a door and comes out with a platter. I love magic.


People's memories are selective. Sure, when we think about '65, we know about the Beach Boys and Bob Dylan and Blah-Blah and the Blah-Blahs. But do we remember the Beau Brummels?  Well, we should, because they were on the radio all the time. You couldn't click on your transistor or flip on the car radio without hearing this song:

Speaking of Dylan, here's the deal:  I didn't know who this guy was in '65. I liked Rainy Day Woman #12 and 35, because I found it weird, and weird was good at ten years old. My brother told me the guy's real name was Robert Zimmerman and that he was from Hibbing, Minnesota. Okay. Well, good. My brother bestowed this knowledge upon me like it was very important. That's why I remember it to this day. I guess you had to be nineteen to "get" Bob Dylan; not ten.

I still think he is a bad singer -- I mean, come on. Nevertheless, the man can write. This became clear to me when I was watching a documentary about Duluth, Minnesota, and the narrator recited a line about the city that I thought, "Wow; great line!" and then she said, "This was written by Bob Dylan." That's when I finally got it.

This song is preternaturally long. The Beatles' tracks were 2:30, tops. It's not as long as "American Pie", which is like comparing "Achy Breaky Heart" to "Amarillo By Morning". Apples and putrefied oranges. But it's still long. Again, I did not understand at age ten that DJ's needed bathroom breaks. I thought they just sat there and listened to the records like I did. And every once in a while, they shouted out the station's call letters and the current temperature. But disc jockeys, just like real people, had to heed nature's call, so they really (really) liked this song:

I was fascinated by Roy Head when I saw him on Shindig. This was the most rubbery performer I'd ever seen! I remember worrying that his tight pants would split, but that could be just a false memory. Still, this guy was limber!

My boys were everywhere in '65. There was the Saturday morning cartoon, which was awful, but they played the songs, so, of course, I watched it. There were Beatles figurines. My mom bought me Ringo (thanks, Mom). 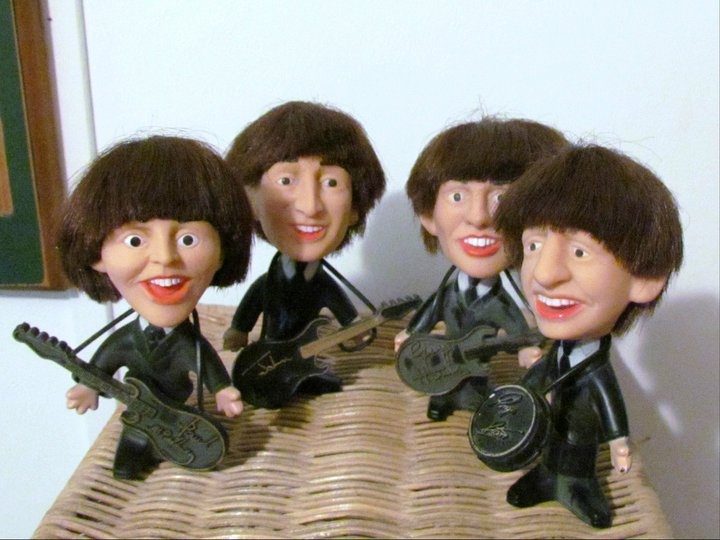 (notice that they all look basically the same)

Of course, if I still had that figurine today, I would be a multi-millionaire! (Okay, maybe not.)

My boys had three records in the Billboard 100 in 1965. Here's one that doesn't get played a lot:

Another artist who's mostly forgotten, but shouldn't be, is Johnny Rivers. "Live At The Whisky A Go Go" was monumental. Never mind that they apparently didn't know how to spell "whiskey". In the early two thousands, I had the opportunity to see Johnny Rivers live, and he was still phenomenal. And everything that Jimmy Webb wrote in his awful book about Johnny means absolutely nothing to me. Mister Balloon Man.

Johnny hit the charts in 1965 with this:

Let me tell you about joyous music.

The first time I heard The Lovin' Spoonful was when "Daydream" wafted out of my transistor's speaker. What a day for a daydream. My best friend, Cathy, and I skipped along the streets of downtown Grand Forks with our radios pasted to our ears, warbling "I'm lost in a daydream, dreamin' 'bout my bundle of joy".

Then there was Zal Yankovsky.

Zal knew that music was joyous. I don't even have to point him out to you in this video -- you'll know him. That's how music is to me.