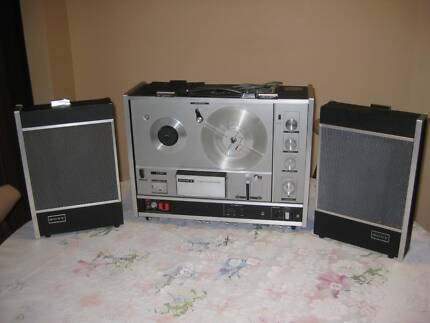 The first "magic music box" I remember was our kitchen radio. Mom spent almost all her waking hours in the kitchen. She liked to listen to Arthur Godfrey, who was apparently the Regis Philbin of the late fifties. If I remember correctly (and I'm sure I don't), Arthur Godfrey had a radio talk show that went on for about three hours every morning. But also, the magic box played music! And shoot me, but I didn't care how bad the songs were:

My big sisters did a fascinating dance on the kitchen linoleum to this:

That's the moment when I learned it was okay to move to music and people wouldn't point at you derisively.

Upstairs in their bedroom, my sisters had something called a "record player". 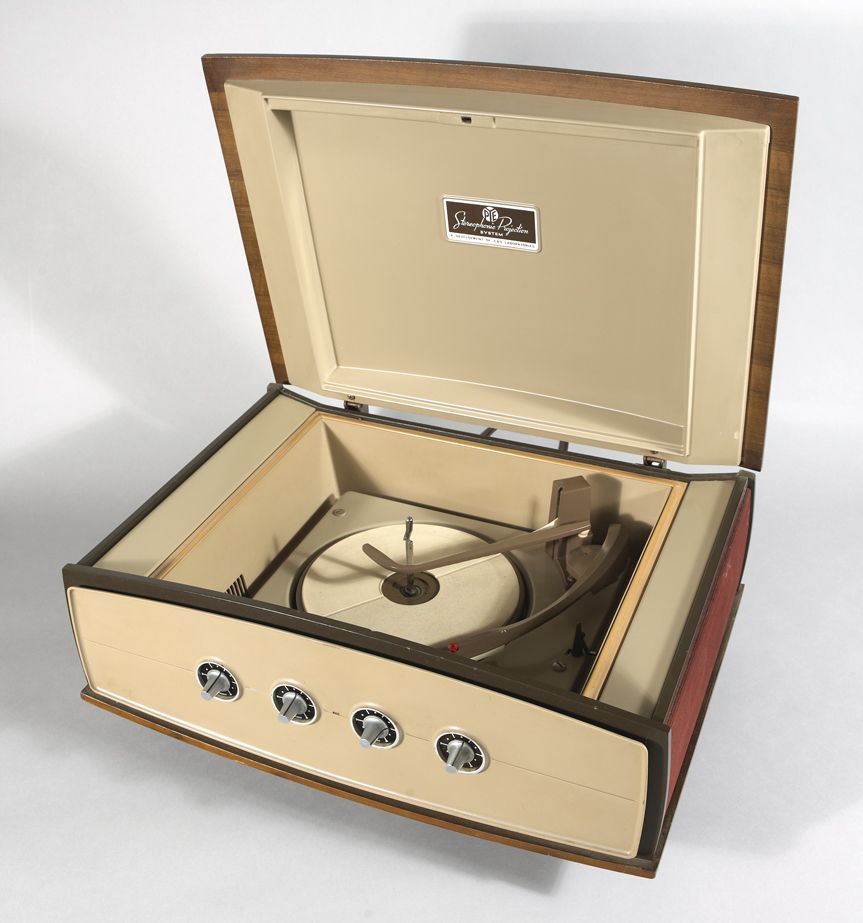 They wouldn't let me touch it, which was just mean. I did have hand-to-finger dexterity; it wasn't like I was going to crack their precious "records", which is what they called them.

The weird thing about our household was, we had scads of records, dumped inside a round ice cream container -- some with sleeves, most without -- but Mom and Dad owned nothing with which to play them. Sifting through these records, I wonder now if they were purchased at rummage sales. It was an odd collection of German drinking songs, Sheb Wooley ditties, singles by Lawrence Welk's orchestra.

Speaking of Lawrence Welk, there was one particular record that scared the crap out of me. My parents were diehard Welk fans -- it was the fifties, after all. I played this record upstairs when my sisters weren't around, apparently because I liked being scared:

It still kind of freaks me out to this day. Maybe it's just a flashback.

So music was good, and it was also eerie. Naturally, I preferred the good.

Mom and Dad had two albums; yes, just two. These were 33's. The dial on the record player could switch from 33's to 78's to 45's, but one needed to insert a special spindle in order to play the '45 singles my sisters were in love with. I don't why my parents owned albums, but I do know why they owned these two. I think they loved the songs so much they just had to own the LP's, even though all they could do was admire them. 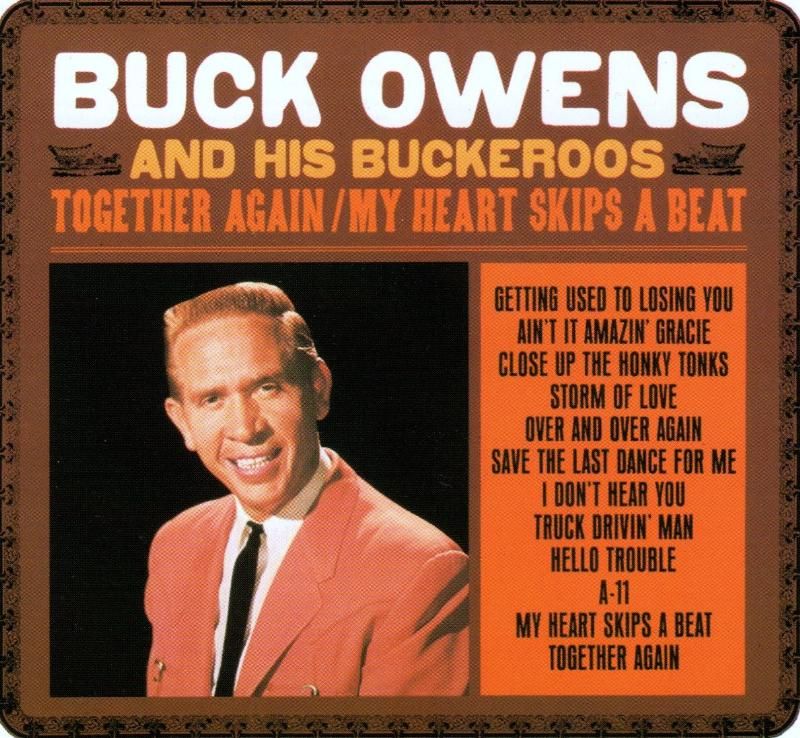 Still two of the best country albums of all time. My parents had great musical taste.

I think I was five when I got my very own record player for Christmas. It was blue with snaps. Portable! 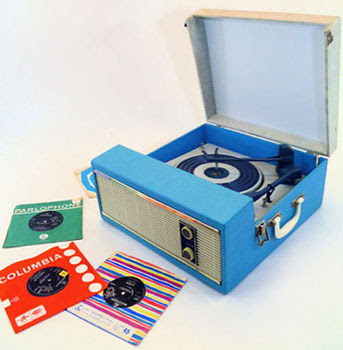 Granted, I owned no records. The most money I'd ever had up to that point was a dime my mom gave me to buy a fudge-sickle from the creamery delivery man and some foreign coins my grandpa had given me, which turned out to be worthless unless one lived in Australia. It would take me a while to build up my own personal record collection. Not to fear -- I had that ice cream "hat box" full of miscellaneous odds and ends. Basically, anything that was musical fascinated me. I will say that the music of the late fifties was not good*.

*Granted, my parents did not own any Jerry Lee Lewis or Little Richard singles.

I did take one record to school for kindergarten show and tell, and did a complete lip-syncing song and dance number to what I realize now was wholly inappropriate for five-year-olds:

As time went on, I managed to collect a dollar here and there (not from actual work).  I thus purchased very select '45's, mainly Beatles singles, which had the added benefit of both the A and B sides generally being good songs. This was new, as the accepted custom was to put a pile of crap on Side B. Thus, with the Beatles, I only paid fifty cents per song. Thanks, John and Paul.

My other singles were birthday gifts from friends (they were poor, too). My brother bought me a couple of LP's, which was an entirely new concept. Rock albums? Dang.

He bought me these two: Yes, quite the disparity. I loved the first one -- the second one I played possibly once. My brother rarely steered me wrong, though. Of course, he saved the very best LP's for himself.

Sometime around age ten I acquired a new sleek player. It looked like this:

Sure, you might ask, how is that an improvement? Well, it ran on batteries! I'm not sure now how that was an advantage -- batteries back then were not "alkaline" -- they were just plain old D batteries that ran down after five plays. But I felt like I was on the cutting edge of new technology.

I thus borrowed my brother's "Help" and "Rubber Soul" albums from his room and learned, really learned, about superior music...until my batteries ran down. I carried that battery-powered player with me to Bismarck, North Dakota, and even treated Merle Haggard to an impromptu replay of his biggest hit, outside his motel room -- apparently because he might have forgotten how the song went (or something). In my defense, I was twelve.

Around age sixteen, I had managed to save up enough money to buy myself an actual stereo sound system from JC Penney. It cost $100.00! This is sort of how it looked: 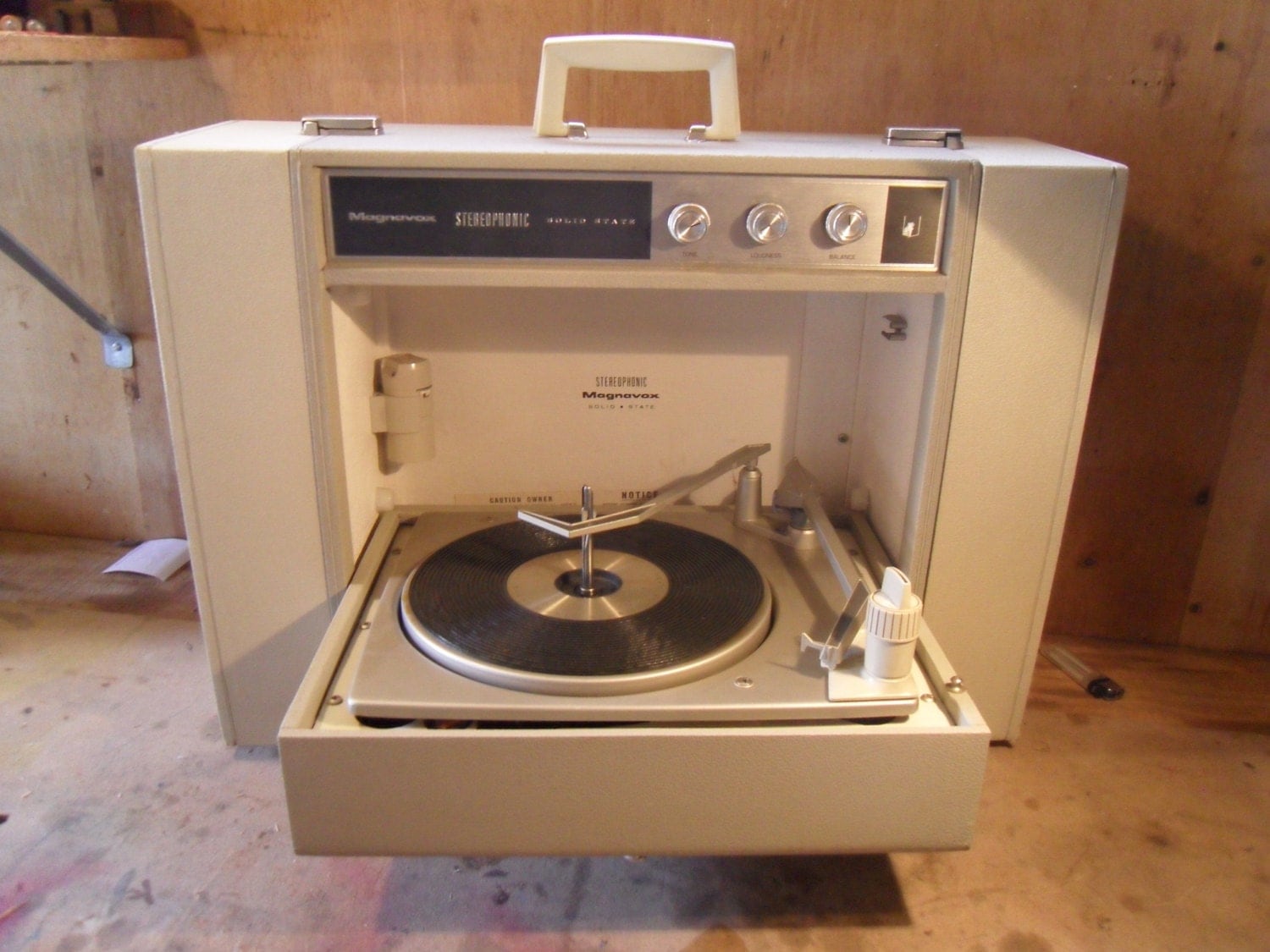 I eventually supplemented it with a big reel-to-reel, which allowed me to experiment with bouncing tracks and other stuff that I had no actual knowledge of, but which turned out to be something that actual musicians do.

Meantime, sometime around 1970, my dad bought his latest Lincoln, which featured something that looked like this: 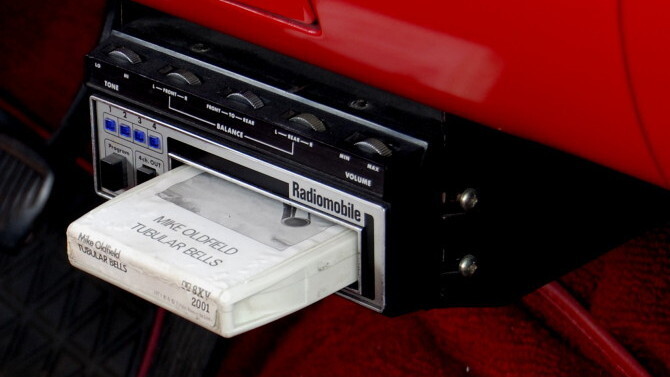 (Missing the cigarette smoke wafting out of the ash tray)

Eight-track tapes had some intrinsic problems. Number one, they were bulky. Dad needed to buy a special case to house his (three) tapes. The other issue someone should have considered was that the tape stopped in the middle of a song, and one would need to flip it over and insert it back into the player to hear the remainder. That sort of killed the effect.

Good music, though, is good music, and you take it where you find it. Dad owned this eight-track tape, which I maintain today is a superior effort: 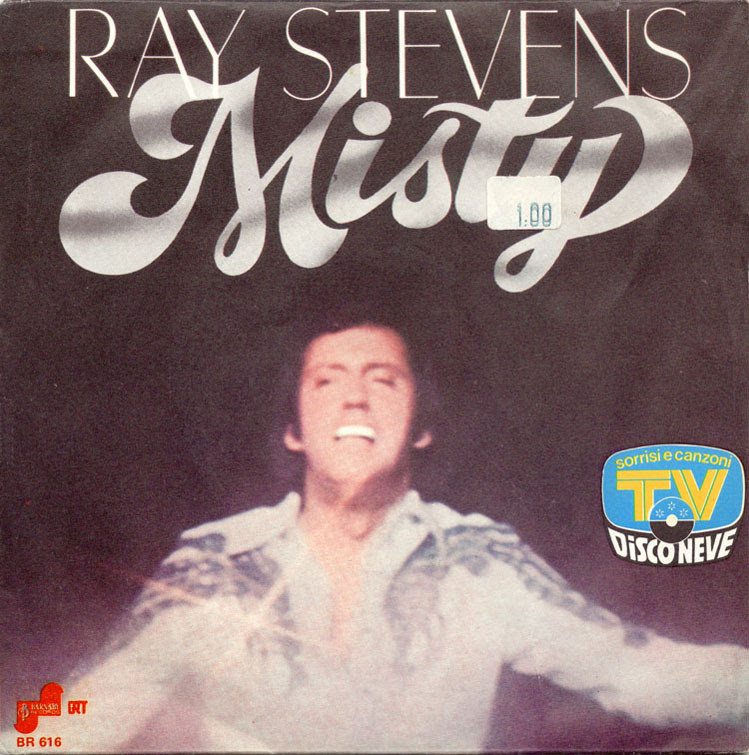 Around 1980 or so, I needed a new sound system. A slick salesman at Pacific Sound told me that Bang and Olufsen was the best around, so I fell for it.

Thus, I commenced to make payments, which were penurious -- some ungodly sum like $100.00 per month. It was worth it, though, sound-wise. I will say it was the best sound system I ever owned.
Strangely, I was still a singles gal mostly, which I suppose kind of defeated the dollar output; but I did buy albums, too, which mostly consisted of Larry Gatlin and the Gatlin Brothers.

Cassette players were more of my little sister's era. I didn't begin to buy cassette tapes until sometime in the eighties, and that's only because I owned this: 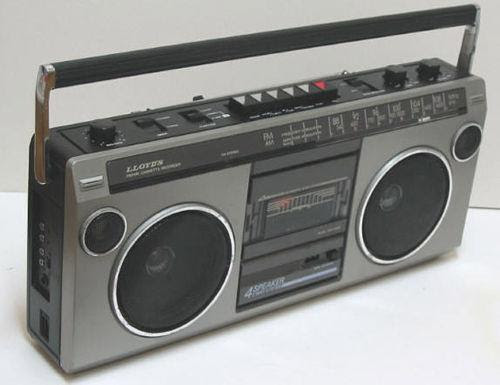 Cassettes were a means for me to capture songs off the radio. There was a program on Saturday nights that played classic rock songs. I don't remember the name of it, but I listened to it religiously, and tried my best to record songs without the DJ cutting in to blather about who sang it and what year it'd hit the charts, and other minutiae that just served to ruin my otherwise pristine recording. I compiled tape after tape of awesome lost songs.

In 1989, for Christmas, my oldest sister sent me a gift certificate for a CD. That was great, but I didn't own a CD player. I'd heard about them, but I hadn't seen the point. I already had all my music in long-play form. I could pick up the needle and drop it on whatever song I wanted to hear.

What was I going to do? Start buying up all the albums I already owned, only in CD format?

Because that gift certificate weighed on my mind, I went out and bought a CD player. This is the first, the very first, CD I purchased: 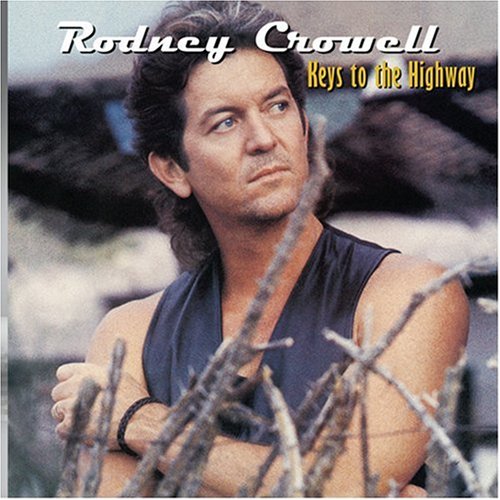 I don't know why. I guess because it was the latest CD at the time, and I liked Rodney Crowell.

The sound was a revelation to me. I don't know if a CD actually sounded better than an album, but I sure thought it did.

And thus began a lifelong quest...to buy up every album I'd ever cherished in CD format.

Today I can buy a single song. That's nice, but something is missing. When I bought albums when I was sixteen, I got the songs I wanted and songs I didn't know, but some of those unknowns turned out to be gems. And I got to read the liner notes. I knew who the players were and who produced the album. I knew who wrote the songs. That was all vital information. One might not think it is, but it is! My musical education came from liner notes.

So, what's the best music technology?

I like everything aural. I like MP3's. I haven't bought an MP3 in...forever. But who knows? I might one day hear something I want to buy.

But MP3's are rather cheap and tawdry. They're the backstreet, cynical, man-handling of music. They're music for those who don't really like music.

That said, I'm ready for what comes next. Brain-wave music? I've kind of already got that, but I'm open to its possibilities. The songs in my head don't currently feature that desire surround-sound.

I've run the gamut, but I'm not dead yet.