In 1993 my career was finally on track. I'd dwelled in the bowels of part-time work since approximately 1979 -- retail, standing in high heels for approximately four hours a night; hospital work for which I wore a uniform of polyester white slacks and polyester cobalt blue tunics that needed to be washed and ironed on a board propped in the middle of my living room every other day, since I only possessed two pairs of each; before pinning on my white plastic name tag and heading off for an evening of clipboards and lab slips. Honestly, that hospital job was my all-time favorite, but it was a dead end. It wasn't like I was going to advance to a position as an M.D.

By 1990, I'd landed an insurance job, of which I had absolutely zero knowledge. Luckily for me, one of the people they'd chosen for the thirty-seven open positions dropped out, and I guess I was first runner-up. My only claim to fame was "medical terminology" knowledge. I guess that was good enough.

All thirty-seven of us rookies attended claims processing class in a cavernous room stocked with rows of CRT's, on the third floor of a downtown office building that had rooms for rent. Our trainers had flown in from Philadelphia, and they disdained us and weren't shy about sharing that view. We were rubes, after all -- rural western plains folk; simpletons.

The flock of us inhabited that windowless room for six long weeks. At one point in the midst of training, our overseers announced that three of us had been appointed as supervisors, but it wasn't too late -- we remaining castoffs could still apply to be assistant supervisors. I went for it -- what the heck -- what were they going to do, fire me for trying? I flamed out. So I was back to learning how to process routine eye exams, holding my arm in the air fruitlessly, hoping to get a simple question answered, and generally failing to accomplish that.

At ten o'clock and twelve, all of us would filter down the elevator to the concrete planters outdoors and smoke cigarettes. Those who were non-partakers would mill about until it was time to go back. My most vivid memory of those weeks was that I got to park in a winding, escalating parking garage, which sure as hell beat slopping through snow from the hospital exit through a frigid, wind-whipping January squall in order to rev my car's motor for ten minutes before it was sizzling enough to drive home.

Once our brand-spankin' new building was completed, we moved out of that stuffy room and  a couple of miles north, and by 1991 I'd finally landed that vaunted assistant supervisor position I was convinced I wanted. I think there must have been some sort of expansion -- no, I'm sure that was it -- and new supervisors were needed. As an "assistant", I had a leg up, so, yes, I for once and all got to be in charge.

Being in charge is just as awesome as one imagines it to be. I was born to be in charge. I was a benevolent leader, which did not sit well with The Big Cheese Woman, and she at one point threatened to fire me for having the utter nerve to bring donuts for my staff on a required Saturday overtime shift. But I (alas) outlasted her and in fact exacted my revenge by helping to get her fired. She was an evil, evil woman, and I relished watching her walk out the door of US Healthcare for the very last time with her two brown paper grocery bags of belongings. Karma was delectable.

Once The Evil Bitch was gone, life became sublime. Our staff had by then tripled and we had girls and women poring out of every hallway crevice. I had convinced our Pennsylvania overseers to promote two deserving women to the post of supervisor -- one had been my assistant. I believed then, and still do, that one should be promoted based on merit and not according to "who we like or don't like". That same bullshit that permeates every corner of corporate life.

Bumpkins that we were, all of us; young, old, and middle-aged; loved country music. And it was the nineties, when country music was exciting and relevatory. Artists like Tracy Lawrence, Carlene Carter, Clint Black, and Suzy Boguss pored out of our FM radios and our TV screens via CMT.

I remember my local DJ calling Lari White "LAW-ree White". Maybe that's how she preferred to be addressed. So when I purchased her album, "Lead Me Not", I always said (inside my head), LAW-ree White.

She was good -- we forget, maybe because her flame flared so quickly -- but we really shouldn't forget.


This is the song that will always be "Lari White" to me:

Hearing Lari White reminds me of sultry summer nights. Saffron street lights in the black night. Girls I used to know; Peg and Laurel and Lynette and Tracy.

And limousines in the night. 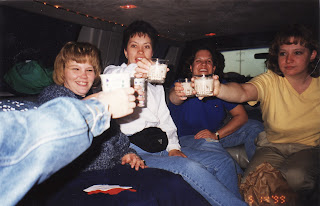 RIP, Lari White. You shouldn't have left us this soon.