I "graduated" from junior high in May, 1969 and transitioned to Mandan Senior High that September. I was grown-up! Shoot, I was fourteen going on fifteen! On my way to freshman renown!

Richard Nixon had become president. I'd pissed off my dad by tacking my eighth grade history project (a campaign placard) up on the wall right outside the kitchen door ~ "This Time Vote Like The Whole World Depends On It ~ Nixon/Agnew". Dad was reliably perturbed and baffled. I think he literally scratched his head as he alighted the stoop. My work was done!

That summer odd things happened. Teddy Kennedy killed a girl and the Manson Family killed a bunch of people in gruesome ways. Woodstock happened and most people didn't give a shit. My best friend Alice and I went to the Mandan Theater and saw "Butch Cassidy" and "True Grit". We learned that Glen Campbell was a terrible actor and that Paul Newman still had the bluest eyes under the sun.

Oh yea, there was some kind of "moon landing" that summer. Unfortunately, it was a Sunday night, which was really bad scheduling. Plus the optics weren't good. It was hard to make out what exactly was going on. I did park myself in front of our console TV, and I think my dad was there, too. Maybe Dad was more impressed than I. I didn't grasp the enormity of the event, but I was fourteen. I was more excited anticipating the next "World of Beauty" kit that would land in my mailbox. 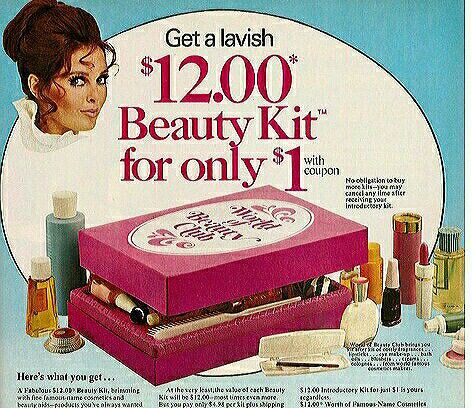 (I hope it has white lipstick!)

I'd abandoned rock and roll. But old habits died hard. I still had one foot in AM radio, but mostly, thanks to the influence of my new best friend, I became immersed in country music.

I was still aware of certain '69 hits, like this:

And this song, over and over:

I liked this one because I watched Hawaii Five-O every Thursday night at nine p.m. on CBS television (Book 'em. Danno):

But frankly, the number one song of the year was one my seven-year-old sister really liked, because it was a cartoon. This is where pop music was in '69, as much as one wants to wax nostalgic over "Get Back" and "Lay Lady Lay":

On the home front, life had settled into a routine. Dad was sober "sometimes";  Mom was a harpy, mostly. I retreated to the room I now shared with my adolescent sister and spun records on my (still) battery-operated turntable.

1969 was Johnny's year. He was insidious. Johnny, with his black waistcoat and his Carters and Statlers and his Carl Perkins and Tennessee Three climbed inside one's brain matter and made himself at home.

But, try as he might, Johnny could never supersede the artist of the sixties, or basically of ever; Merle:

Glen Campbell had his Goodtime Hour on CBS. It was a summer replacement for that subversive Smothers Brothers Comedy Hour. I was so oblivious I didn't know the Smothers Brothers were incendiary. We tended to overlook the political screeds, because they appeared nightly on the network news, and focused instead on the comedy.

Glen Campbell, on the other hand, was an artist I despised. Fortuitously, I later came to my senses ~ but it wasn't entirely my fault. Glen played the hayseed role so well, he was one of the prime reasons I disavowed any familiarity with country music anytime I was pinned down about my musical tastes.

"Hi! I'm Glen Campbell!" he piped up through the cornfield. If it hadn't been for John Hartford, I would have clicked my TV dial to whatever medical drama was playing out on NBC.

It didn't help that Glen insisted on recording Jimmy Webb songs, although this one, in retrospect, is not bad:

My musical tastes ran more towards:

This Joe South song didn't win, despite my best efforts.

Nobody (but me) remembers Jack Greene, but he had the number one song and Single of the Year in 1967, with "There Goes My Everything".

In 1969 he had an even better song (as Ricky Van Shelton can attest).

Porter Wagoner actually had a career without Dolly Parton, believe it or not. Alice and I sat cross-legged in her living room and played this LP (and made up our own lyrics to the song (that are NSFW):