There's No Such Thing As "Good Musical Taste" 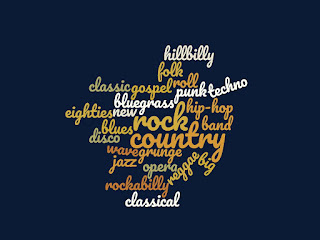 Generally, people who drape the "good taste" sash across their shoulder are either obnoxious snobs or audiophiles more interested in showing off their expensive audio gear than their actual record collection. We've all met them. They either want to "explain" music to us or drag us into their den, drop the needle on an obscure Brian Eno LP and stare into our faces, searching for a rapturous reaction.

My dad loved any music sung in a foreign language. He didn't understand the words, but it didn't matter. He particularly loved Spanish, because it sounded "pretty" (which it does, by the way).

I'm a sucker for falsetto. Essentially any song in which the singer slides into falsetto voice hooks me every time. I have no clue why; it just does.

I don't always agree with my husband's opinions, however, He claims that good music died in the seventies. I love eighties pop. Looovvve eighties pop, Casio keyboards and all. He reveres Bob Dylan. And while I agree that Dylan is a singular American poet, most of his songs are not good.

If you really listen to the lyrics of this song, he's just throwing words together. No, there is no deeper meaning that we peasants just don't "get". And even if, according to Bob, there is some deeper meaning, I don't want my music to be a study program.

Too, I maintain that music is a reflection of memory. Or memories. The life we were experiencing when a particular song was popular is almost as important as the song itself. My sons hear Beatles songs objectively. I feel Beatles songs in my gut. They were my life.

Objectively, this is not that great of a song. Subjectively? It was everything:

I can't even try to explain how everything changed in '64, because those who didn't live it will never understand. It's as if there was sort-of music before; then suddenly actual music exploded the planet.

I guess you had to be there.

The snobs will tell you that "Yesterday" is the greatest Beatles song. No Beatles fan will ever tell you that. The Beatles weren't about ballads. They were about splitting the earth wide open.

Music, though, is not all conscious memory. I love Glenn Miller, whose band recordings were barely a ping on the radar when my parents became married.

And I love rockabilly, which was my older sisters' music.

I love doo-wop. Even I'm not old enough to recall the doo-wop heyday.

In some regard, music must be cellular. Sometimes there is no conscious memory; there is only a "feeling".

So, Mozart? Okay. I can climb on board. That doesn't mean Mozart lovers have better musical taste than Hall and Oates aficionados. Maybe musical snobs are simply closed-minded.

Me? Well, you can see for yourself.

That, that, is the glory of music.