There was a time during the early seventies when the singer-songwriter came into fashion. I'm not sure why. It may have had something to do with the doldrums the country was suffering from -- the  "misery begets misery" thing. "Everything sucks, so we may as well just wallow in it."

We had a string of hapless leaders. Gerald Ford never wanted to be president, but he assumed the office by default and tried to make the best of it. It didn't work. Ford will best be remembered for"WIN" buttons ~ Whip Inflation Now. Because pinning inane badges to our lapels would solve the country's problems.

He will also be remembered, thanks to Chevy Chase, for falling down a lot. He fell down the Air Force One steps. He bumped his head on doorways. He hit a golf ball into the visitors' gallery and bonked a spectator on the head. Gerald Ford carried a  look of perpetual confusion. He did not inspire confidence.

Worse was Jimmy Carter, the eternal scold. Jimmy did not hesitate to tell Americans that the country's problems were OUR fault. If we'd just buck up and live the straight and narrow, everything would be great. Never mind that I was already living the straight and narrow and nothing ever got better. All I got were stern lectures from Jimmy on TV about my "bad attitude". Interest rates were eighteen per cent, but dang, if I just atoned for my sins, HIS life would be so much easier. We all apparently worked for him. What Jimmy really needed was a button ~ "Repent Now". 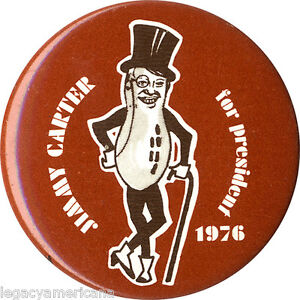 (Any man whose campaign button features Mr. Peanut is a guaranteed failure.)

Amidst these doldrums, came along the singer-songwriter. James Taylor was the most notorious representative. James ascribed to the Jimmy Carter philosophy ~ if we'd just do our freakin' jobs, everything would be fine. "Just call out my name (you idiot) and I'll be there".

Even at age sixteen I knew that was BS. I called out and nobody was ever "there". Maybe God, but I wasn't entirely sure about Him, either.

James was by far not the only offender. We had to contend with Bread and the precious Jackson Browne, and the even more precious Cat Stevens. Music essentially reeked. Worst of all was Crosby, Stills and Nash, who the pop culture mavens tried to convince us were musical geniuses, when what they really were were three-part harmony singers who needed much, much better songs.

Granted, not all soft rock recordings were bad.

But you get the picture.

The Eagles are classified as soft rock, but they weren't. They were country-rock. There's a huge difference.

I would be remiss if I left the impression that soft rock singer-songwriters were the only artists played on Top Forty radio in the early-to-mid seventies. Thank the lord for Elton John. But I will say that early seventies music was for the most part tame. We were supposed to think about the songs and "absorb" them.

There will always be a place for soft rock. The eighties gave us Air Supply. The nineties brought forth John Mayer.

If one is a passive person; if one prefers music that's not too challenging, why not? I don't make judgments; I just tell you what I like and don't like.

But this retrospective will provide, at the very least, a snapshot of how music was, and why I truly hated it.