We Are All A Snapshot In Time 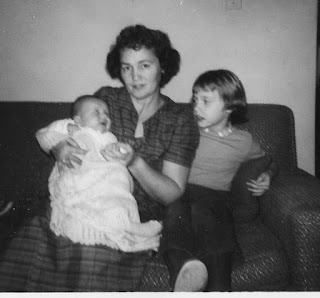 Our memories of a person do not encompass the whole person. Maybe they're the way we choose to remember them, or the way we can't help but remember them. But as real as they may be, memories do not define someone.

I don't think one can be defined. When it's all over, no one will capture who we were, because we were a lot of different people. I was probably six years old in this picture and not even a fully formed person yet. I liked my little brother (as far as I know), but I wasn't supremely interested in him, to be honest. I mean, he was a baby. They're not all that interesting except to their parents. He was essentially a novelty. He didn't usurp my place in the family, because I didn't actually have a place. After this photo was taken, I probably climbed the stairs to my bedroom and opened up a book.

My mom, in the photo, looks tired. She'd already borne four kids, and was no doubt not anticipating having any more (and my brother would not be the last). Her life couldn't have been easy, with three teenagers, one about to be married herself, plus me, plus now one more! But just like I can't fathom girls nowadays crying about how difficult life is, with all the disrespect in the workplace (which, to me, is just life), my mom would be baffled by a woman actually planning the number of kids she would have. She had as many as God determined she would deliver. If they arrived eighteen years apart, so be it.

The late sixties came as a revelation to my mom. She'd always asserted herself (my dad needed a lot of help), but now she no longer did so quietly. Something or someone on TV told her that she didn't have to take that crap anymore. She contemplated divorce, but probably never seriously. She was caught between two eras -- one that said "for better or for worse" and another that assured her she could be her own independent woman. She chose the first. Independence was a nice dream, but not not a practical one. Her life and finances were bound up with my dad, even though he'd years before stopped contributing to the financial portion.

She went a little crazy. I hated her for that. Now I understand that she self-medicated the way all of us do. For about a year, she took to her bed, anesthetized. Those lost years do not define her. They're a woozy snapshot.

I learned to fend for myself, which is a gift in itself, although I didn't think so at the time. I was a pre-teen who compared my life to "normal" existences and found mine lacking. I wouldn't learn until many years later that everyone has secrets. Every relationship is fraught, even the most seemingly conventional.

The sixties don't define my mom. Once my dad's sobriety "took", she reverted to her natural self. She was a difficult woman, closed-up; but when she gave up the pills, she reverted to the person I'd always known her to be -- scolding and judgmental, sure, but at least present.

My mom had a hell of a life. Trapped in the times she lived. But she made the right decision in staying with my dad. Had she left him on his own, he'd have died in his fifties. Penniless and vomiting in a gutter.

Instead, Mom and Dad floated into the twilight together. The end was not good. Disease overtook my dad's brain and stole his essence. She was alone. But she was a hell of a strong woman. She persevered until she no longer wanted to.

And I guess I never will.

I do think, however, that she passed something down to me.

That snapshot is all we have.

Email ThisBlogThis!Share to TwitterShare to FacebookShare to Pinterest
Labels: my dad, my mom, We Are All A Snapshot In Time