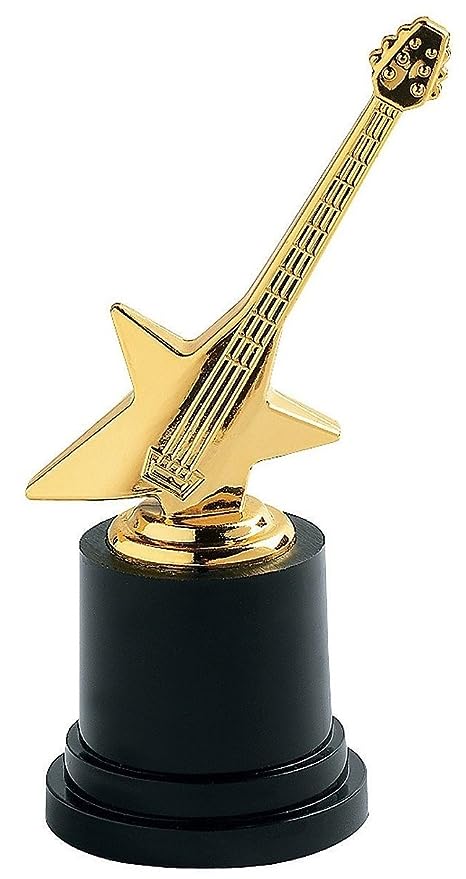 (Trophies Always Have To Be Supremely Ugly)

There was a time when I watched award shows religiously. I'm not sure why ~ perhaps to confirm that my favorites had the proper cachet and to bitch about the wrong choices the so-called judges made. Of course, that was long before I understood that awards are bought and paid for and perpetually political (I actually prefer the naive me.)

I generally was lost with the Oscars, since I'd managed to see approximately one of the nominated films, and the flick I caught never won anything. The Grammys were kind of a high-brow joke (even to the naive me) because inevitably the winners would be the industry-coronated choices (as opposed to anything any sane person would actually listen to.) "The Girl From Ipanema" beat out "I Want To Hold Your Hand" for record of the year; and you know how often we hum the melody of "Girl From Ipanema".

The Emmys were more my speed because I definitely knew how to watch TV and I was familiar with most of the nominees. The CMA Awards, however, was my show of choice. I did know my country music and frankly, my taste was eminently superior to most. Plus I was a Country Music Association member and thus got to pencil in my choices on the paper ballot.

I like to flip on the TV at night before bedtime because the hypnotic rays tend to lull me to sleep, so I tuned into the first five minutes of the Grammys last Sunday night. I will admit, I was confused. Some gal was inhabiting different rooms of a home and brushing her hair and bouncing on the bed with a stuffed bunny; and then someone I thought was Justin Timberlake (who I later learned was Ricky Martin ~ I wasn't wearing my glasses) joined her in the number and someone I was supposed to know played the trumpet. And then some other guy piped in.

Nevertheless I kept watching. The evening's host, Alicia Keys, soon showed up with four gals, only one of whom I recognized (granted, Jennifer Lopez was hidden behind a humongous broad-brimmed hat). The one I knew was Michelle Obama, and I thought, okay ~ she's a music icon. I did see Dolly Parton in the audience; the only person I actually recognized. And then I flipped the TV off.

I've now decided to create my own awards, The Shellys. The categories are completely capricious, based on whatever the hell I feel like bestowing.

Best Rock Song From the Year I Graduated High School:

Nominees:
Drift Away ~ Dobie Gray
Goodbye Yellow Brick Road ~ Elton John
Stuck In The Middle With You ~ Stealers Wheel
Loves Me Like A Rock ~ Paul Simon
Reelin' In The Years ~ Steely Dan

Best Song My Big Brother Told Me I Should Like:

The Rain, The Park, and Other Things ~ Cowsills
Rainy Day Woman #12 and 35 ~ Bob Dylan
Another Saturday Night ~ Sam Cooke
Telstar ~ The Tornados
Where Have All The Flowers Gone ~ Johnny Rivers

And the award goes to:

There is no live video to be found of the winner. However, the first runner-up (Ringo) will accept the award (I have a sneaking suspicion all the Beatles videos have been removed from YouTube. Thanks. Paul.):

California Girls ~ The Beach Boys
I Can't Help Myself ~ The Four Tops
Ticket To Ride ~ The Beatles
Baby, The Rain Must Fall ~ Glenn Yarbrough
My Girl ~ The Temptations

The winner (not even close):

The Shelly goes to:

This was so close:

Of course, the winner is this:


Song That Scared The Crap Out Of Me (or at least befuddled me) As A Kid:
They're Coming To Take Me Away ~ Napoleon XIV
Fire ~ The Crazy World of Arthur Brown
Running Bear ~ Johnny Preston
Last Kiss ~ J Frank Wilson
Devil Or Angel ~ Bobby Vee

Best Dion and The Belmonts Song:

Again, a tight competition, but Dion DiMucci doesn't care, because he's a winner, regardless:

I'm not a big fan of hair, except for:

Yes, there are seven nominees, because it's impossible to narrow this category down to five.

This one wins only because I can't bear to post any of the others:


Hey, look at the time! Well, the show has run far over its designated time, so tune in again next year for more Shelly Awards!

And all you forgotten acts, you're welcome! It's time you got your due!