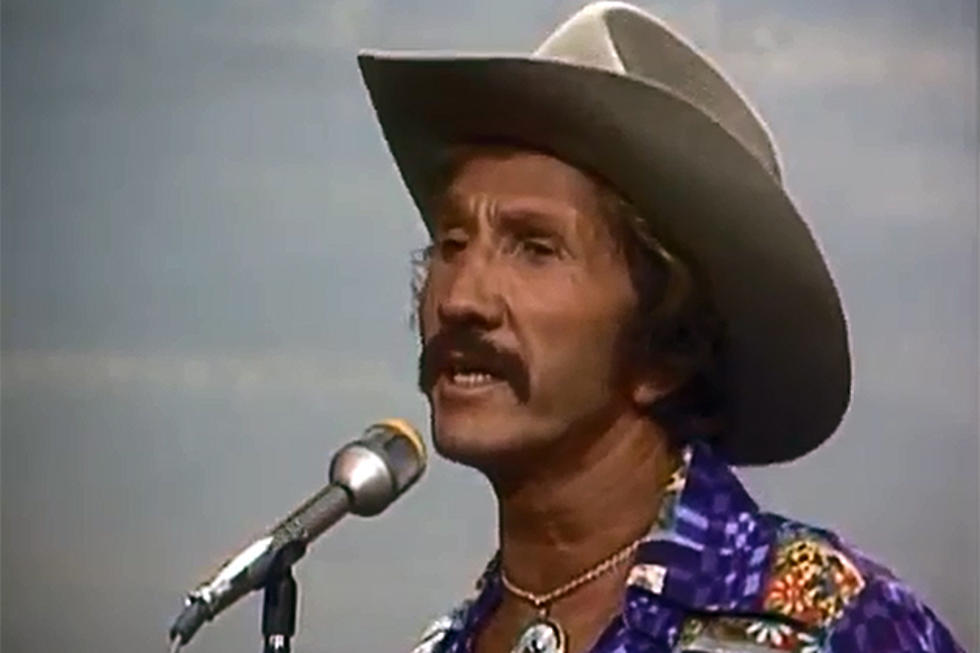 Marty Robbins has been gone so long, it's easy to forget what a power he once was. He's been gone longer than many music fans have even been alive.

It's so easy to forget ~ twenty years from now, will George Strait be only a dusty memory? If you're NBC television, a reedy-voiced synthetic cowboy has already been crowned. The dimwitted network is calling Blake Shelton (Blake Shelton!) the king of country. (You don't just get to say it and it comes true.)

But even before King George, there was Marty Robbins. It used to be that a king (or at least a prince) begat a new king. Once there was Hank Williams, who begat Marty Robbins, who begat Merle Haggard, who begat Randy Travis and George Strait, who begat Dwight Yoakam. And then sadly, it ended. But my point remains.

My history with Marty Robbins is long. The very first concert I ever attended was when my mom dragged me with her to see Marty at the Grand Forks Armory when I was but five or six years old. I can still visualize our seats ~ metal folding chairs to the far right of the stage. If I stood on tiptoe, I could occasionally catch a glimpse of the brown-suited crooner over the heads of six foot-tall grown men. I sort of knew some of Marty's songs, but I wasn't exactly a sophisticated music aficionado at my young age. This was Marty's white sport coat phase, which, as I recall, was a huge hit with the gathering.

(I only recently learned that it was the Glaser Brothers doing the doo-wahs.)

I was mortified at the end of the show, when my mom began pushing me toward the stage to garner an autograph. I refused to go. I had a hard and fast rule, even at age five ~ I wasn't about to embarrass myself, regardless of Mom. If she wanted a signature scribbled on a slip of paper, hey, go for it! Of course, she didn't. I, apparently, was her surrogate ~ maybe that's why she brought me! It's not as if she and I shared a lot of bonding experiences.

Then I forgot about Marty Robbins. A lot of other things got in my way, such as the British Invasion. I was a kid in love with rock (which was actually pop, but nevertheless). It's not that I was completely unaware of Marty Robbins' songs, but I didn't try to memorize them until I hit my country phase. This is one I eventually learned all the words to:

(Much later to be immortalized in Breaking Bad,)

Regrettably, I also missed one of the best country songs of all time:

There was something about this next song that set my nerves on end at age seven. I would like to say that feeling has since dissipated, but muscle memory is strong.

This single from 1964 launched a certain songwriter's career. Marty heard it on a demo tape and decided to record it. I never associate this song with Marty Robbins, but his version was the first:

I remember babysitting for some kid (I loathed babysitting) and his mom had a tiny collection of LP's that I perused once the little one had finally toddled off to bed. I was playing this song when Mom finally alighted the doorstep with her latest beau in tow:

This is more my speed:

Then I sort of forgot about Marty Robbins.

Around 1975 I acquired a new puppy that I decided to name Marty. No matter that this "boy" turned out to be a girl. "Marty" stuck. Marty was my sidekick ~ she loved only me and refused to tolerate anyone else. I sort of reveled in that. This was my dog. Marty traveled with me all the way to Fort Worth, Texas and was my steadfast compadre on the high plains in between. I don't know why I named her "Marty", but the connotation was clear.

In '76 Marty Robbins appeared again. I took a chance on his album, "All Around Cowboy" and fell in love with this:

This track was included on the album, and though I knew it was derivative, I got sucked in:

I'm guessing it was 1979 when I and my brood traveled to Duluth, MN with Mom and Dad for one of our fun family outings. Someone (most likely Mom) found out that Marty Robbins was scheduled to perform in concert at the Duluth Convention Center. I remember haggling with some guy on the phone as to whether I would have to purchase a separate seat for my toddler (I lost). We ensconced ourselves in the nosebleed section and witnessed a much more polished Marty Robbins concert (which I viewed through binoculars) than I saw in 1960. Even from a mile away this man was a miracle. Loose, good-hearted; funny; commanding. I didn't even think about getting an autograph and Mom had apparently gotten it out of her system, because she didn't think about it, either.

I'm reading a biography of Marty ~ it's not compelling. I hunger to learn more about him, but I won't find it here. Unbelievably, only one book (that I can find) has been written about the man. The author's intentions were good, and I hesitate to criticize writers; but the book consists of a series of, "then he...." and "his next album was...". It tells me little about Marty Robbins the person. And I believe that would have been a fascinating story.

Like radio stations were wont to do, they began playing a posthumous track shortly thereafter. Even now, hearing it makes me tear up. Yep, it was appropriate:


For some of us fans, at least, some memories just won't die.