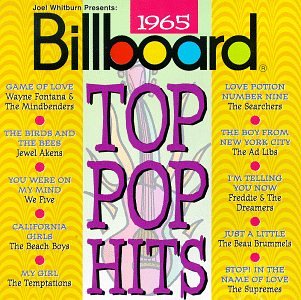 The problem with only being able to get one's music from AM radio was that once a song became a hit, the disc jockey played it at least once an hour. This is the primary reason why baby boomers hate certain songs with a passion (Take "Ode To Billy Joe", for instance. Plus Bobbie Gentry never once said what was being thrown off the bridge, and it probably wasn't even anything interesting anyway.) Conversely, if there happened to be a song you really liked but wasn't in the top ten, good luck catching it on the airwaves. If I did happen to catch it, I'd be in the backseat of the car and my dad wouldn't stop yapping long enough for me to actually hear it.

Plus I didn't know what most of these artists looked like. There were some fan magazines with tiny black and white photos of the top groups, and sometimes network variety shows would feature a pop act "for all you kids out there". I always felt sorry for the bands who were just looking for a little promotion and had to endure the mocking of the eighty-year-old host who'd made his name in the vaudeville days.

On a Wednesday night in the fall of 1964, however, a wondrous thing happened ~ and that thing was called "Shindig". Suddenly I could see all the artists who had previously only existed in my brain as breathtaking sounds emitting from a tinny speaker and tiny one-by-two-inch black and white promotional snapshots in celebrity mags. Yes, the show was in black and white, too, but why quibble? Sometime during the show's run, I switched music teachers and had accordion lessons (yes) on Wednesday nights. By the skin of my teeth I made it home by 7:00 p.m. each week, but it was incredibly stressful.

Shindig had its go-go dancers in white-fringe mini-skirts doing the jerk and...well, that's the only dance I remember...but it wasn't overly distracting, and far superior to a geriatric comedian chewing on a fat cigar and spouting, "Take my wife....please." Everyone who was anyone appeared on Shindig ~ The Beach Boys, The Beau Brummels, The Lovin' Spoonful, The Sir Douglas Quintet, The Dave Clark Five, The Supremes, Roy Orbison; even The Beatles. However, the act that still resonates with me from Shindig all these years later is The Righteous Brothers.


I'm guessing The Righteous Brothers probably made more appearances on the show than anyone aside from Bobby Sherman (I guess you had to be there.) Watching Shindig, I was in heaven.

I still had my 45's, too; and my brother's. In retrospect, the singles I liked the best had a couple of requirements ~ an awesome beat was a given. Then either a great production (yea, even at age nine I recognized the great ones) or something a little off-kilter.

These are the ones I loved then:

I have no explanation as to why that song grabbed me, but it most certainly did. I really didn't know anything about Motown. I didn't know about The Temptations or Smokey Robinson and The Miracles. I did know The Supremes, but I had no inkling that this was a huge Detroit conglomerate. I just liked the song.

This one is (and always will be) a marvel. It's the intro. How was I to know that the creator of this song was a musical genius? I didn't know who Brian Wilson was. I didn't even know that most of the guys in the group were named Wilson. I did know that they all wore red and white striped shirts. I loved this song so much that I wrote my own version, called "English Boys" (it was the British Invasion era, after all.) Just like with the album "Help!", ripping off someone else's creation is the sincerest form of flattery:

This is a mostly forgotten song that is amazing. I love, love this song. And it meets my requirement of being a little off-kilter. The lead singer's voice is quirky, almost artificial; the beat (laid down by Honey Lantree) is magnificent, and the rest of the group was instructed to stomp on the floor to enhance the rhythm during the recording process. The Honeycombs only had one hit, but oh, what a hit it was:

The British Invasion was rife in the mid-sixties. The Animals, Freddy and The Dreamers, Gerry and The Pacemakers, Herman's Hermits, The Yardbirds, The Kinks, The Hollies, Manfred Mann. People think that The Stones were the natural rivals to The Beatles, but that's not how it went down in '64. Everybody was saying it was this group that offered The Beatles the most competition. Creatively, no; but one must remember the times and the songs The Beatles were releasing. The Dave Clark Five weren't that far off the mark. And I liked them. And Mike Smith (rest his soul) was a cutie.

Then there are the masters. In a time capsule a hundred years from now, somebody smart will include this guy:

I don't take lightly the fact that I was present for the dawn of a new age of music. I'm lucky. Generally I'm not a lucky person, but on this one I hit the jackpot. I'll always have that.

And I won't let it slip through my fingers.