Sixty-Four Years of Music ~ Why I Left Country 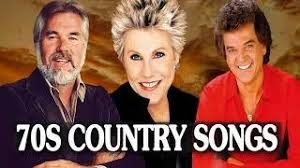 In the seventies, I was a singles buyer. Country albums, for the most part, didn't try too hard. In the late sixties Merle Haggard had done an album called, "Let Me Tell You About A Song", which is the first "themed" LP I can remember. That was an anomaly, however. Country albums generally consisted of one or two hits and nine filler songs. It was a cheat designed to get music lovers to plunk down four dollars and ninety-nine cents. I could never understand why artists, who had to go through the trouble of recording an album, didn't at least look for good songs. Thus, singles were king.

We didn't yet have a full-fledged music store in my town, so Woolworth's record department was my deliverance.Singles only cost a dollar, so even during my poor times, I could at least pick up one.

Gradually, however, riffling my fingers through the accordion of country singles in Woolworth's bins left me angry and frustrated. I bought a lot of crappy singles during that time, just to go home with something. Like anything a person tires of, it didn't happen overnight. Sometimes one doesn't even realize they're being played. Country label execs at some point decided that we hayseeds would buy anything, and they probably didn't like country music anyway, so it was a win-win for them.

The top artists in the late seventies were Crystal Gayle, Kenny Rogers, Dave and Sugar, Billy Crash Craddock, Johnny Lee, Sylvia, Charley Pride (who'd somehow lost his mojo), and Barbara Mandrell. Sure, there were some wonderful outliers ~ The Oak Ridge Boys, Eddie Rabbitt, Rosanne Cash, Gene Watson, The Kendalls ~ but the charts were hogged by mediocre artists' "country" tracks. I don't have anything against Kenny Rogers, per se, but except for The Gambler, he essentially bastardized country music. As for the others....

The sensation that Crystal Gayle was posturing never escaped my brain. Her singing seemed so stylized, with the way she pronounced her words. I think, had it not been for her freakishly long hair, she would have simply been a flash in the pan, regardless of who her sister was.

As I understand it, Sylvia is actually a good songwriter; and one must do what one needs to do to advance in the music biz, but her singles were like deadly earworms.

Ahh, Dave and Sugar...to be generous, this is actually country music, but something about that guy set my teeth on edge. He was too seventies-disco-cool, with his hair and chains. It also bothered me that they replaced the good girl singer with somebody else and acted like no one would notice, simply because she didn't quite fit the image Dave wanted to evoke (seventies-disco-cool).

I generally like Barbara Mandrell, but this song is putrid. Barbara also had a network TV show where she featured her sisters (Louise and the other one, who couldn't sing), and it was tedious. Every week Barb would do her shtick of playing the one song she knew on the steel guitar and then they'd do some goofy skits and sing a song together (the non-musical sister's mic was no doubt turned off). Every freakin' week was the same.

So, yes, I finally reached my breaking point. If the country music industry didn't respect me, ta-ta! I turned to MTV and hallelujah ~ they were playing actual music! I love, loved MTV. I loved it for many years, and I missed the resurgence of actual country music (thank you, Randy Travis). Those who hung in there through the lean times didn't miss it. I did. My patience had been snapped. And I had to play catch-up, once I discovered that the walls had been battened with clubs and fiddles and steel guitars.

The seventies music honchos should be ashamed of the tatters they ripped country music into. As well as those artists who blithely tottered along.

Even thinking about it makes me shudder.