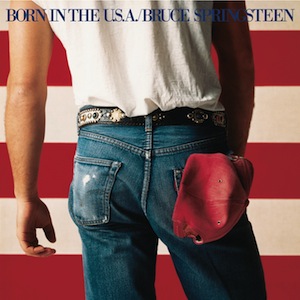 There was a time when artists just wanted to have a hit. It's true. For a couple of years, The Monkees recorded anything that was laid out before them. Then their egos exploded their brains and they thought they were much more than a hugely successful pre-fab pop group. And then they were done.

There was a time when making good music was the objective. Sure, we had Bob Dylan, but he was drunk on Woody Guthrie songs and a plethora of vomited words. The Beatles might have had something to say, but one couldn't actually tell, because a million people interpreted their lyrics a million different ways. The seventies were essentially a silly time, when anything, no matter how insipid, could become a hit, and did.

Then came the eighties and Bruce Springsteen, who insisted on airing his grievances for the world. The rich boy who bemoaned the plight of people like me, who he could only conjure in his imagination. He had a problem with a president most of us revered, but Bruce was drowning in jewels, so he could afford to bitch from his gated mansion on the hill.

In the two thousands, a perfectly nice country group called The Dixie Chicks couldn't muzzle their lead singer, who was compelled to spill her bitter guts about another president. And we just wanted to hear "Tonight The Heartache's On Me". The Dixie Chicks, like Springsteen, forgot about the music.

I don't want anybody's politics to befoul something as sacred as music. There is an absolutely putrid single that's currently setting download records, called "Shut Up About Politics", and I just want The Stupid Five to shut the hell up. If I have to hear that insipid soundbite one more time, I'll smash a rock through my TV. And I generally like The Five.

Can we have one thing in our lives that isn't political?

Everybody seems to have forgotten that music is supposed to be fun. That's the bane of social media ~ it's ruined one of the precious few organic pleasures in life.

Here's what music is supposed to be:

Email ThisBlogThis!Share to TwitterShare to FacebookShare to Pinterest
Labels: bob dylan, bruce springsteen, dixie chicks, keep politics out of music, shut up about politiccs, the five