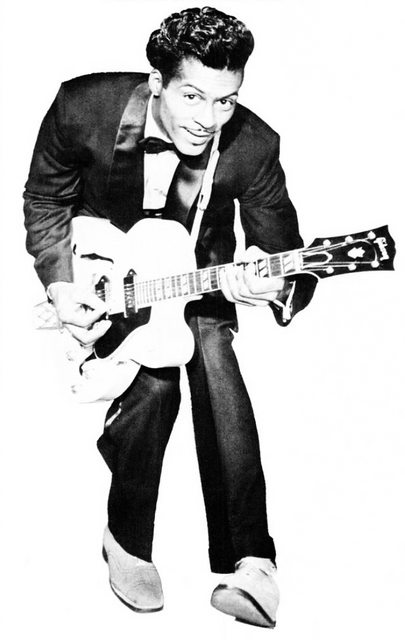 Every so often a song I've heard a million times catches my ear. Back in my songwriting days I would study songs, trying to figure out what made a song stand out. It's a futile exercise. One cannot replicate a superb song and expect the result to be anything but dreck. Great songs are gossamer.

One of my favorite sayings is, "it's deceptively simple". I think that applies to Chuck Berry's songs. A member of the rock 'n roll class of 1955 (!), his chord work wasn't fancy. A lot of Chuck's songs had essentially the same melody ~ three chords; no minors, no suspendeds; no fancy stuff. It was Berry's wordplay that made the songs shine.

My big brother first introduced me to Chuck Berry's songs in 1964. Chuck had a hit with "No Particular Place To Go", which in hindsight was pretty racy, but it was catchy and I liked the way the words rolled off his tongue.

Did you know that "calaboose" means prison? Makes no sense in the context of the song (or does it??), but it doesn't matter. It's the onomatopoeia that matters.

But it is this song ~ the one I heard on the radio the other day ~ that shows Chuck Berry in all his story mastery.

"C'est la vie", say the old folks
It goes to show you never can tell

They furnished off an apartment with
A two room Roebuck sale
Coolerator was crammed with TV dinners and ginger ale
But when Pierre found work, the little money comin'
Worked out well
"C'est la vie", say the old folks
It goes to show you never can tell

They had a hi-fi phono
Boy, did they let it blast
Seven hundred little records
All rock, rhythm and jazz
But when the sun went down
The rapid tempo of the music fell
"C'est la vie", say the old folks
It goes to show you never can tell

They bought a souped-up jitney, was a cherry red '53
Drove it down to Orleans to celebrate the anniversary
It was there that Pierre was wedded to the lovely mademoiselle
"C'est la vie", say the old folks
It goes to show you never can tell

It's a two-minute novel.

I admit, this is how I was first introduced to the song (featuring an unnaturally bushy-haired Rodney Crowell):

And who can ever forget this sequence with Travolta pretending he doesn't know how to dance?

I had to get my Chuck Berry post in under the wire, before country music month begins.

This is how great songs are written.