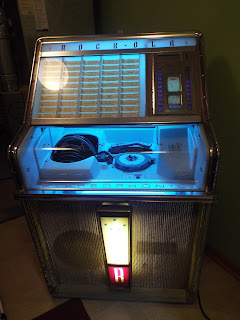 UPDATE:  Sold. Gone. Thanks, Dad, for the memories.

It hurts to put it up for sale. You see, this came from my dad. It was, I guess, 1968 or 1969 when the Rock-Ola took up residence in our garage. My followers know that my dad owned a bar that came as a package deal with the motel my parents purchased in 1966. When we moved to North Dakota in December of '66, the bar, politically-incorrectly named "The Gaiety" was leased out to some guy, so we paid it no heed, except for my dad, who could never resist a flashing neon sign. As the calendar pages ripped, the lease expired and Dad took the bar over. I don't know how the Rock-Ola ended up in our garage exactly, but I think it had been replaced with a newer model; hence my big brother was tasked with rolling the obsolete reject down the bar's front door ramp and shoving it into an unused corner of our garage, smack-dab next to the industrial clothes dryer.

It became a novelty that my little sister and I took notice of anytime we were bored. The machine had its peccadilloes ~ you had to push the reset button on the back to get the record to eject. Not a major deal. All we had to do was prime the machine with a quarter and we could play as many songs as we wanted. The Rock-Ola's ultimate downfall with regard to my sister's and my attention spans was the fact that it didn't house very many records we actually liked. Playing the same two or three records over and over lost its spark quickly. My sister was a pre-adolescent, so we had to haggle to land on records we both liked.

Here are the two I remember:

(We'll never know what The Fireballs looked like in concert, alas.)

Eventually, my mom and dad sold the motel and retired to an actual house. My dad asked me if I would like the jukebox and of course I did. Mom wanted to be rid of it ~ it took up too much real estate, and what would she do with that behemoth anyway? I parked it in my basement and pondered how to make it nicer. First on my list was getting rid of the crappy records and replacing them with songs I actually liked. Then, through some mail order concern, I found jukebox labels. (I don't remember if the labels or the songs came first.) I never took things a step further and refurbished the machine ~ I really couldn't afford to do that, and its rusty exterior reminded me of the halycon garage times.

Nobody who is a direct descendant wants it, because they don't care about the nineteen sixties, which are akin to the Civil War days. And it's not like I hug it every day. I've essentially ignored my Rock-Ola; yet felt secure in the fact that it was always there whenever I wanted to lay my hands on it.

If I could touch it and bring my dad back, I'd never let it go. But time moves on and we need to shed a tear and surrender.

Jukeboxes are passe. Except in country: