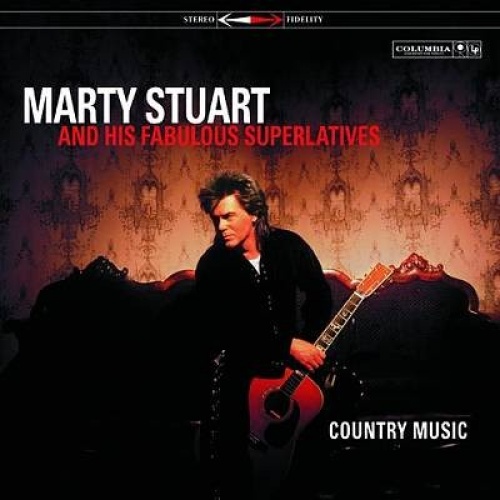 Like me, Marty Stuart is a fan and a student of country music (I'm not comparing myself to Marty Stuart, by the by). The tale of Marty's extensive country music memorabilia collection is well-documented, so I'm not here to tell that tale. As is the story of his teenage debut as part of the Flatt and Scruggs band. And everybody knows about Marty's link to Johnny Cash.

I first was introduced to Marty Stuart via a CMT music video, and that subtle three-boot kick did it for me. Hillbilly Rock was a natural hit, and the next time I saw Marty, he had teamed up with Travis Tritt for an album that featured a couple of outstanding real country tracks.

Marty would be the first to tell you he's not a natural singer. But who cares? In the "Whiskey Ain't Workin'" performance, I defy you to tell me that this is not the most organic musician you've ever witnessed. And that's Marty's strength. That, and arrangement.

"The Pilgrim" is considered a masterpiece. And it was. My husband, no country fan, introduced me to the album. He even, unbeknownst to me, bought tickets for us to see Marty in concert ~ the first live performance we ever saw together.

Then Marty formed a fabulous band that just happened to be, coincidentally, called The Fabulous Superlatives.

I kept the album, "Country Music" close to the vest. Only real country lovers would understand. And here's the genius of Marty Stuart ~ he throws you a curve that stabs you in the heart. He knows musical emotion. Anyone who perceives that music pierces one's guts is a true genius.

I haven't researched Marty's reason for titling it "Country Music", but I can probably figure it out.  He starts and ends the album with old classics, throws in a duet with Merle Haggard in the middle, and rounds everything out with some renaissance "Marty" music.

Marty puts his own spin on this song first made famous by Porter Wagoner, but covered by many, many artists. Even Dylan recorded it. Marty changes up the melody a bit, and it's a strong opener.

A Marty original. Marty's songs judiciously employ minor chords, which immediately add gravity to a song that otherwise might be just a writing exercise.

3. If There Ain't There Ought'a Be

Easily the weakest track on the album. Hearing it today, it sounds completely nineties-dated. And I'm not a fan of the rap that starts the song.

The second-best song on the LP and another Marty original. I first became enamored of the song because of the arrangement and soaring steel guitar. Then I thought about the lyrics. What a plain-spoken ode to love.

If you buy this album for no other reason, buy it for this track. (I guess you could be a cheap-ass and just download this single track, but c'mon.) This track has it all. Seriously. ALL. If you love country music ~ you know the kind I mean ~ it gets no better than this. The song was written by Dwayne Warwick and was first recorded by Carl Butler and Pearl (odd name for a duo, and I'm no feminist, but Pearl obviously knew her place) who actually recorded some classic songs, such as "Don't Let Me Cross Over" and "We'll Sweep Out The Ashes In The Morning". This one is tops, thanks to Marty.

Odd little ditty. Again, this sounds dated, reminiscent of a Joe Diffie song. I don't hate it, but tonight is probably the second time I've listened to it, ever.

Obviously this track got the only notice of any on the album, due to Marty's duet with Merle Haggard. I'm a farmer's daughter, so I automatically was on board. And you know how I feel about Merle, and here's Merle yodeling! Takes me back to the Jimmie Rodgers albums of my young years.

Unfortunately, this is not the excellent song by the same name by Wynn Stewart. I think I kind of hate this one, but every album has its duds.

9. If You Wanted Me Around

Nice Telecaster work on this track. Otherwise, it's a throwaway.

I sort of like this one when it gets to the bridge. Again, it's very nineties-centric (not that there's anything wrong with that).

Marty wanted to honor the legends with this song, and I admire anyone who doesn't forget. The same sentiment could have been executed better, although the mandolin solo at the end takes Marty back to his roots.

This is a Johnny Cash song and a tribute to the Man In Black. The arrangement saves it from being lackluster. I can appreciate the sentiment without falling in love with the song.

No album is fool-proof. I've bought CD's that had one (count 'em, one) good track. I've most likely bought scores of those. If you get two great songs, you are fortunate. If you get three or four, it was worth laying your money down.

I'm tucking this album away, and only sharing it with you. I could go on and on about Marty Stuart and all he's done for people like me. He's never gotten any due, except as a country music commentator. But he's so...soooo much more.

Buy it if you love country. At least buy it for "Sundown In Nashville". Good grief; don't say I didn't share the down low.