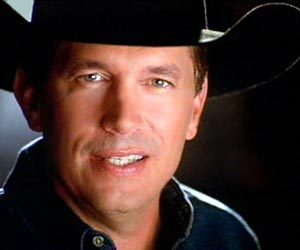 By the end of the 1990's, I will have abandoned country music forever. But, oh, the nineties!

It may have been the times, but I don't think so. I do believe that "music is life through the ears of the beholder", as my blog's theme states, but there was something special about country in the nineties. Randy and George and Dwight had primed the pump the decade before, which allowed the artists of the nineties to soar. Too, I was in the prime of my life, at age thirty-five. And in the prime of what, unbeknownst to me, would become my "career". Blue skies shone above. Like country music, I didn't know what awaited me, but I had a feeling it was something good.

People liked to dance ~ buoyant, shit-kicking dance. Not giving a damn about the wagging tongues of the neighbors next door. Line dance, two-step, stumblin' drape-your-arm-around-your-partner dance. Don a western shirt with spangles dance. We even liked Billy Ray Cyrus, cuz you could dance to him.

You couldn't flip on your car radio and not hear a song that didn't make you bounce in your bucket seat and warble off-key into the breeze whooshing outside your wide-open window. I sang along to "Friends In Low Places" roaring home from work in my white Ford Taurus, and I didn't even like Garth Brooks much.

I'd only recently returned to country music by the time the nineties rolled in, but I was fully committed. I even no longer wanted my MTV.  Radio still ruled. Radio was everywhere ~ in our cars, at work, in the kitchen, on camping trips and in the backyard garden. There was no such thing as "streaming". One could barely figure out how to get online and even when we did, we looked around a bit and said, ehh. Country had caught up with the rock world, though, and country videos were available twenty-four hours a day on CMT.

New artists were popping out all over. And ladies (if that is the correct PC term), if you still believe that country is lagging in the female artist department (which never was true, by the way), welcome to the nineties! In the decade there were as many hit songs recorded by women as by men. Maybe girl singers were simply more fun to listen to then, because they were joyous, rather than whiny.

Let's take a quick whoosh through the decade, shall we?


The year 1991 kicked off in grand country style, with a newly-formed duo (whatever happened to them?):

Another new act had a familiar last name,

Sometimes a song just hits you. It might not be sung by a well-known artist. It might be a passing fancy. Or it might just stay with you:

I liked this new guy. He had a cry in his voice, just like good country artists should. And this is a quintessential country song:

Speaking of dancin', try not to boogie to this. Joe Diffie was a huge country star in the nineties ~ people tend to forget. I don't.


I could go with a plethora of artists for my second pick, but let's be real. in 1993 Dwight Yoakam released his penultimate album that featured this:

Again, shoot me; but this is an awesome recording. We can arm-wrestle over it, if you insist:

Nineteen ninety-five was a little lean in the "good hits" department. Thank goodness for Mark Chesnutt. I know I devoted an entire post to Mark, but if I'm culling the best singles of a particular year, this is definitely one:

Oh, remember her? She "ruined" country music, they said. Ha! I, too, was a bit skeptical of Shania Twain in the beginning, but let's compare Shania's songs to today's "country music", shall we? Here's the deal ~ she's an excellent songwriter. She found a niche; she exploited it. Deal.

I will end with 1996, just like Ken Burns did. It's fitting. Ken, a country music neophyte, was maybe onto something. After '96 country life took a downturn. We had the Dixie Chicks, who were okay, but not as awesome as their press wanted us to believe. McGraw and Hill (isn't that an encyclopedia company?) took over. An Australian, who, granted, could play a mean guitar solo but never ever recorded a distinctive track, won new artist of the year at the CMA's. Country was changing. And not in a good way. Somebody somewhere in the bowels of a Nashville office determined that fans didn't know what the hell they needed or wanted, and they were going to proceed to show them.

Let's end on a high note, though, with The King: