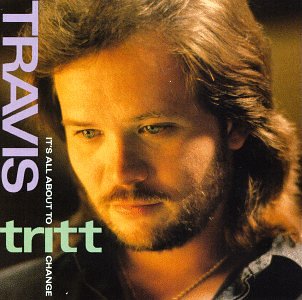 The period from the late eighties to early nineties was so rife with exciting new music that I almost took it for granted. Like a spoiled child, I expected more and more. I'd heard "Country Club" on my local FM station ~ it had a good beat; you could two-step to it; but it didn't strike me the way a spanking-new George Strait single did. "I'm Gonna Be Somebody" was actually a better track than I gave it credit for at the time.

But it wasn't until 1991, when a new show on NBC called "Hot Country Nights" appeared out of nowhere as a summer replacement that I really sat up (on my couch) and took notice of Travis Tritt. He sat on a stool in center-stage with just his acoustic guitar, and this is the song he performed:

For a voice with so much soul, his performance was heartbreaking in its simplicity. Sometimes it's not the bells and whistles that grab you ~ sometimes it's the quiet. This sure wasn't "Country Club".

Then he did a complete turnabout and released this song, which is sort of the nineties' kiss-off answer to "Take This Job (And Shove It):

Soon Travis teamed up with Marty Stuart to record a duet that embodied the time-honored tradition of the bass-thumping country shuffle. And I loved it:

I will readily admit that my favorite Travis Tritt recording is a remake of an Elvis song that was awash in insipid artificiality, like most Elvis songs. THIS version, however, is extraordinary:

Like most artists of the period, Travis parted ways with his label, but never fear ~ he's still out there and making music. I learned, in fact, that he just did a concert with my latest obsession, Tracy Lawrence. I discovered this via Travis's website, which is an actual site and not a tiny-fonted slap-together page like poor Ricky Van Shelton's.

Travis Tritt is a musical chameleon. I can't pigeon-hole him, and I bet he likes not being tucked inside a neat package.

The last track that caught my ear, when I still listened to terrestrial radio, was one that sums up most of our philosophies as we glide through this big blue ball of ether:

And Ken Burns be damned ~ Travis Tritt represents everything about the nineties that Ken forgot.