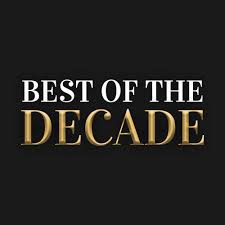 I wasn't going to do it. First of all, it's virtually impossible. I barely remember yesterday (truly), much less the last ten years. But it seemed sacrilegious to let the decade slip away without some sort of retrospective.

I did a search for some "best of" lists in order to jog my memory, and it appears I am woefully out of touch. Which is fine. I'm not the key demographic advertisers are trying to reach. The prevailing wisdom is that people my age are already set in their ways and are thus unconvincible. Naturally, the prevailing wisdom is wrong. My hunch is that advertisers view GenX'rs and millennials as ripe for the picking; willing to go into debt for today's hot commodity. And isn't that marketing's goal? God bless 'em.

I suppose I should list the top ten surgical procedures and brand-name medications. The top lab tests for geriatrics, top incontinence products and Medicare Advantage plans. But that's not really fun.

Thus, I'm going with the usual TV shows and movies; the grizzled edition.

Top TV Shows of the Decade

A disclaimer ~ I don't subscribe to HBO, so if it's not on Netflix, I'm not aware of it other than in passing. There are most likely wonderful TV series not on my list, but I have to go with something I've actually watched.

Honorable Mention:  The Americans, which I've only seen a couple seasons of so far.

I'm not a regular movie-goer. I probably see three to four movies a year. The trouble is, most of the movies released sound utterly uninteresting, and I'm not into cartoons (better known as super-hero films.)

Something relevant to me:

Top Websites of the Decade

Stay tuned for tomorrow. It might just be time to enumerate some "worsts".