Like with most things, I'm a little off-kilter. Resolutions are supposed to start on January first -- everyone knows that, silly. I commenced my 2020 resolutions somewhere around mid-2019, but they still count. One might assume that as a person ages, they let it all hang out; give up, give in. I certainly thought that.

Alas, I spent a good number of years going where the winds took me. Life was a series of circumstances; little effort was required. What was gonna happen was gonna happen. It's not as if I was a passive observer. I could definitely step up when it counted ~ I raised my two boys to be upstanding, flourishing individuals (it worked). I had my professional career phase, in which I had the opportunity to apply everything common sense tells one is the means to uplifting people (it worked).

Now I'm kind of all about me.

Around May of 2019, I realized that being "obese", as doctors like to code their claims, was doing me nothing but harm. I no longer cared about how I looked, but how I felt. Climbing stairs caused my knees to creak. I slept like crap. I finally understood that losing weight wasn't a "diet", but a lifestyle. I love, love junk food. Give me a donut and you'll gain a new best friend. Unfortunately, enough finally became enough.

To date, I've lost thirty pounds, and I look pretty good, if I do say so. It's not easy. After eight months of deprivation, resentment surreptitiously comes a'knockin'. I took a diet vacation in the two weeks between Christmas and New Year's, and now I feel like a novice, fighting hunger pangs and battling to re-assume the program.

It's also interesting how eager people are to feed you when you are tussling with the devil on your shoulder. My cubicle neighbor is attending culinary school and likes to bring in delights to share with select persons. It's a fine line between assuaging someone's feelings and guarding one's hard-fought victories. I've settled upon taking two bites. It's a compromise.

My husband, who is a man and thus self-absorbed, enjoys picking up delicacies at the deli as a treat for me. I eat them, naturally, all the while mentally calculating how I'll need to make up for it the rest of the week.

I started doing counted cross-stitch in the eighties. I no longer remember if I came up with the idea on my own or if peer pressure caused my obsession. I was working at the hospital, and all the nurses (well, maybe not all, but most) were working on projects. This was what we did on the second shift. It's not that nothing happened during the evening hours, but the air was quieter.

I completed dozens of projects from 1980 to 1988, framing them all, giving some as gifts. I became a crafting master. Then I stopped. I don't remember why. I think life just got busier and I was no longer working odd shifts. Now some thirty years later, I've taken it up again, and it relaxes me just as it did back then. It's a strange phenomenon ~ it's really not the finished product that hooks one, but the "doing". Repetition? I can't explain it, but it works. It really works. I will keep on.

My first project back (in progress): 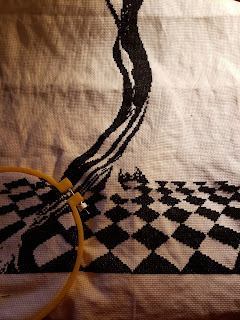 I want to finish a third April Tompkins novel; at least I think I do. Writing can be fun and it can be complete tedium. I've written so much of this follow-up novel that it would be sacrilege to not finish it. It could turn out to be a novella ~ time and imagination will tell. The good thing about writing is that one falls in love with her characters, even if no one else does. Discipline is an issue, though. A real writer would have completed the damn thing in a month. I've had this current project in progress for about a year. Obstinance will force me to finish it ~ I know me. 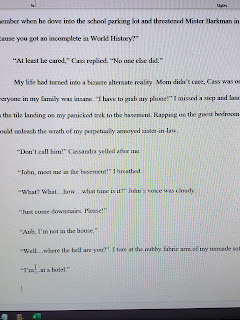 I'm still here ~ still kickin'. When I was a kid and I thought about the year 2020, I assumed I'd be a crotchety old lady digging her own grave. Turns out, like most things I assumed back then, that's not exactly right.

Here's to keepin' on.