Are You Ready To Work From Home? 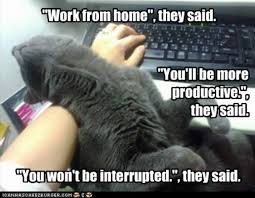 Unexpectedly, just like that, I'm becoming a telecommuter (thanks, Corona!) I like to have some time to prepare for big life changes -- four months is ideal; one day isn't.

The good news is, I've calmed down a bit since yesterday. My heart palpitations have temporarily subsided.

When people imagine working from home, they assume the transition will be seamless. Working with computer systems over the years, I know better. Anything that can go wrong will.

My home computer is rather slow. It hasn't bothered me much; most of the stuff I do online does not require lightening-fast response time. If Firefox takes two minutes to load a web page, I take my dog outside or swipe through Twitter on my phone. All those computer fixes I procrastinated about have suddenly become crucial. My Windows 10 setup recalcitrantly refuses to install updates. Google tells me this is a "known issue". I've tried several suggestions with no luck. I'm not going down the road of restarting in safe mode and plucking random "host processes" or anything ending with .NET and willy-nilly deleting them in the misguided hope that something magical will happen (the only thing that'll happen is my PC will stop working all together).

I did manage to conduct some system cleanup. I'd forgotten about cccleaner, which I'd had and used on my previous setup. First of all, it's FREE, but most importantly it's efficient and moron-friendly. cccleaner took care of a bunch of unwanted stragglers. My anti-virus software is stunningly efficient. I use Malwarebytes, which is also FREE. I did purchase a subscription a while back, though, since I was so impressed with it. There are free anti-virus programs that also work well:  I've used AVG in the past. If you are looking for recommendations for any kind of program, go to CNET first.

Since I was panicking yesterday and felt that my failed Windows update was crucial, I impulse-purchased a program called RestorO -- big mistake. Not only did it fail to fix my problem, but it created many problems of its own. It was advertised for $27.99, which at the time seemed like a small price to pay for sweet deliverance. They charged my bank account $30.00, but what's a couple bucks here or there, right? Then my trusty Malwarebytes began signalling me every 30 seconds that RestorO was malicious and was causing PUPs, which sound cute, but aren't. Tired and wary of the constant alerts, I tried to delete RestorO -- it refused to leave. Thus I had to search for another free program for removing guests that wouldn't exit. CNET told me to try Revo Uninstaller. It did the trick! Again, FREE.

I've given up on installing that obdurate Windows update -- sometimes one has to know when to surrender. But I did do some needed purging.

On the non-computer side, I submitted an Amazon order for my favorite coffee, which will be delivered Tuesday. Had I known I'd be separated from fresh hot java, I would have been proactive. All my (many) Amazon packages have been previously delivered to my workplace, so finding something on my doorstep will be new.

I won't have my special pens and highlighters and file folders, but I suppose I will improvise. Truth be told, I'm not feeling this. I predict doom. But it has to be done. Either that or my two hundred hours of PTO time will dissipate in a flash.

All I can do is cross my fingers and pray that it all works. There might be upsides -- stay tuned for updates.