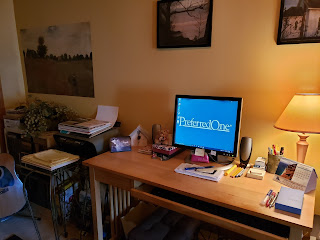 In some ways it's felt like forever. Then again, it's but a blink of an eye. My home office has existed for two-plus months. March 17 was my first day as a telecommuter, and here's the deal: I like it. I would have to be dragged back into the office, and even then I would seek out every opportunity to bolt for the door. Why didn't I know this before? Who is the fool who enjoys toiling inside a cubicle? Granted, my job doesn't normally lend itself to telework, but "in these troubled times" all rules have been abandoned. I'm just as productive at home as I was in the office ~ I have good days and not-so-good days. It all evens out.

As I approach my last three weeks of employment, I've tried to remember everything I need to tell my boss about my job that she doesn't know (which, honestly, is about one hundred per cent. I've done this for seventeen years; I am long past the need for supervision.) No one has been promoted to my position yet, so I am unable to share my wisdom with them ~ they're gonna have to learn the way I did, by making it up as they go. I am not opposed to that. In 1991 when I was promoted to a supervisory position at a former employer, the assistant told me on my first day, "I'll tell you how we do things." I replied, "Okay, and I'll tell you how I do things." Everyone must put her own stamp on a job, and God, fresh blood can only be a plus. It's true that I'm somewhat territorial, but that will subside, once I no longer care.

As I pass the two-month mark, I've thought about things I no longer do:

Things I now do:


As I hit the milestone of age sixty-five this week, my husband bought me art supplies. I'm an artist, but not a dexterous one. I'm not ruling it out, however. I never rule out anything. I'm a late bloomer ~ constantly surprised by the things I am able to do.

So here's to art and feeding one's soul.


This song catches my breath, but it's about moving on, so it fits.