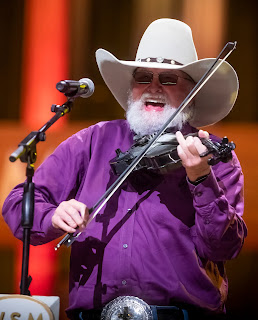 I confess, in 1980 I had no idea who the Charlie Daniels Band was. I visited the movie theater with my mom to see "Urban Cowboy" because we both liked country music and John Travolta. I also didn't know who Joe Walsh was and barely knew Jimmy Buffet. I unfortunately was familiar with Kenny Rogers and fortunately with Boz Scaggs. The movie itself was kind of a dud -- I mostly remember that Scott Glenn was good as a bad guy. And that the new song featured in the flick, "Lookin' For Love", pretty much reeked.

The high point, musically, was this:

My older sister was enamored with this song. I essentially appreciated the nimble fiddling. I've never been a fan of southern country rock, but once Charlie Daniels was on my radar, I began to pay attention. For a time, this song was a favorite:

I liked this one, too:

For a long while I had a wrong perception of Charlie Daniels. I wasn't sure what to make of him -- his music was kind of ragged; his band certainly was. I preferred my country acts to dress in Nudie suits. I thought he was one of those radicals with kooky views. Charlie began as a session player, featured on recordings by Bob Dylan, Leonard Cohen, even Ringo. For sure, Charlie held divergent views in his eighty-three years on earth, but I really got to know him through his tweets. Politically, he and I, it turned out, were simpatico.

I didn't know much about Charlie, but what I knew, I liked. Charlie Daniels was a decent, country (as in USA) loving man. I'm gonna miss his voice.

Good job, Charlie Daniels. For a southern rock (country) dude, you did yourself proud.