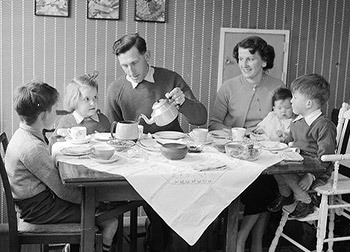 When I'm writing I've found that my best soundtrack is rock and roll from the fifties. I don't want anything too jarring to take me out of my head, yet I need something in the background. We like to remember the fifties as Jerry Lee Lewis, Buddy Holly, Chuck Berry, and Little Richard; but frankly the majority of charted hits in the fifties were soothingly bland -- three-girl groups, Bobby Rydell, groups named after shapes -- The Platters, The Diamonds, The Coasters. Maybe it sounded subversive at the time; we all take our rebellion where we find it; but it was in reality conformitive. Music producers didn't want to push the envelope too far and offend straight-laced sensibilities.

The fifties were before my time. My older sisters lived it -- I lived the sixties. I didn't latch onto fifties music until a couple of decades later, via K-Tel compilation LP's. All my music up 'til then was tied up in my life experiences. I was born in 1955, so my first cognition of music was sometime around 1961. But as someone who gobbled up music, I was keen to learn. No offense, but I think my sisters were focused on the wrong music.They bought singles, as many as their collected pennies allowed, but they kind of missed the gems. They bought things like this:

I know they liked this:

And you know how I feel about Elvis. But they missed this:

I don't condemn anyone for their taste in music. Music is tied up in memories, a conduit for recalling our past. Lord knows I don't claim most of the pop music from the seventies, even though it happened during the prime of my life. And something happened in the sixties that hadn't been dreamed of during the Eisenhower years.There is a clear dividing line between the middle of the century and what came after. That's not to say there wasn't seminal music created during Ike's time; there was. My sisters, though, had only American Bandstand and nervous AM radio as their guide. I was six years old when my sisters were sixteen and seventeen. They collected few physical albums. One I liked, but didn't know why, featured this song:

Fifties music had its gems. Every decade has its own.

Nevertheless, as I'm struggling with my novel, listening to the fifties soothes me and informs me.

And I don't want to simply let it pass by.