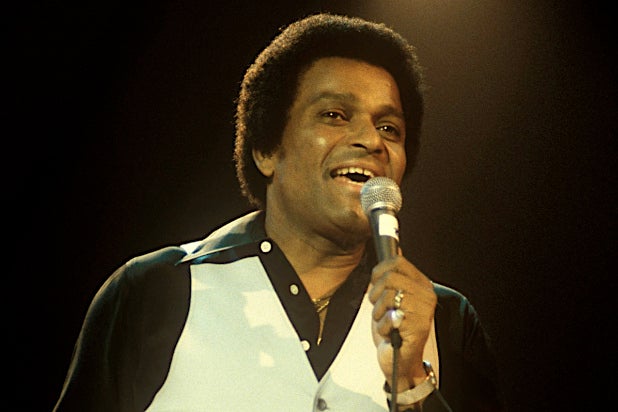 I was a newly-minted convert to country music in 1967. Admittedly I had tons of catching up to do, but instead of looking back, I was keen to discover country for myself. Country was uncharted territory for me, and if I was going to embrace it, it had to be on my own terms.

'67 was an odd time to embrace country music. My FM station was in love with Glen Campbell, who wasn't exactly country; but night after night, the disc jockey played Campbell and deep Willie Nelson tracks. Clearly the DJ hated country and was simply trying to make the best of his bad situation until he could move on down the road to something more hip. He exclusively played two albums, rightfully assuming no one was listening anyway. In my tiny tomb of a bedroom the only signal that reached me was the FM channel, and I heard enough of "Me And Paul" to last a lifetime. My country mentor, my friend Alice, patiently steered me away from FM. Country music -- real country -- was exploding on AM radio. A new girl singer named Tammy had a sad track called, "I Don't Wanna Play House"; Connie Smith was singing about Cincinnati, Ohio. A country teenager's swoon, Merle Haggard, had three songs in the top ten. And some new guy who spelled his first name oddly, Charley Pride, was busting the country airwaves. His voice sounded like it belonged to an older guy, yet he was brand new. And he had a killer song:

Alice and I knew nothing about this new artist, except that we liked his songs. The internet was decades away from being invented -- all we had was radio and, to a lesser extent, the three broadcast networks who rarely deigned to showcase country music. When I heard "The Easy Part's Over", I pictured a grizzled cowpoke who'd finally muscled his way onto country radio.

I don't remember who heard it first -- Alice or me -- but one day the local DJ casually mentioned that Charley Pride was a Black artist. What? In country? Had he accidentally stumbled into a Nashville recording studio where George Jones was crooning into the mic in an open-collared shirt and a tumbler of whiskey gripped in his hand, and the producer spied Charley lingering awkwardly and thought, hey, this might be interesting?

Charley Pride had grown up on country and it had seeped inside his bones. He'd listened to the Opry on Saturday nights on his crank-up radio in Sledge, Mississippi, and he was in love with it. And he sang the way he sang.

Rain drippin' off the brim of my hat

Chet Atkins, creator of the notorious "Nashville Sound", produced Charley's first singles. "Just Between You And Me" was the first one that charted, and it was not only a great song but a great track. Atkins managed to tone down his beloved strings and background singers and emphasize the elements that made a country single "country". Alice and I liked great recordings; we had no checklist of required artist attributes. I was partial to the Bakersfield Sound, but I could get on board with Hillbilly, too.

One of the first two LP's I bought as a twelve-year-old was this one: 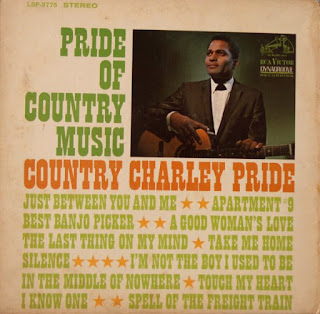 I was just sifting through my dusty record albums the other day and I discovered that I bought a lot of Charley Pride's albums -- seven, in fact. It's impossible to underestimate the impact he had on country music in the late sixties/early seventies. There was a handful of country superstars -- Merle, possibly George Jones, Loretta Lynn -- and then there was the second tier. Charley was a superstar.

I've written before about the momentous event in my young life when Merle Haggard and his retinue checked into my parents' motel. Alice and I had long before purchased tickets for his live show, but to actually see the man in the flesh (walking his dog!) was earth-shattering. One of the opening acts that night just happened to be Charley Pride. Alice and I already had the inside scoop, but most of the audience was taken aback when a Black man appeared on stage. He made a couple of jokes about having a "permanent tan" and "probably not what you expected", but the fans lapped up his performance and his joy.

And, yes, I got his autograph (still have that, too).


By the mid-seventies Charley's star had begun to fade. Unless you're George Strait, your country shelf life is about ten years, if you're lucky. Charley had taken to recording covers of recent pop hits and I was slowly abandoning country. So he and I finally parted ways.

Oh, did I forget? I didn't, actually, but this was not one of my favorite Pride tracks, even though it was by far the recording that shot him into the stratosphere:

In retrospect and sentimentality, I kind of begrudgingly like it now.

Don't ever (ever!) forget the impact Charley Pride had on country music. He was a glowing orb that other artists of his time only wished they could be.

Charley lived a long and happy life and was inducted into the Country Music Hall of Fame in 2000 (Really? It took that long?)

Charley Pride passed away on December 12, 2020 at the age of 86 from complications of COVID-19 (Thanks, China) shortly after he was honored with a Lifetime Achievement Award at the CMA's. A big chunk of my childhood went along with him.

Thank you, Charley. Alice and I loved you.