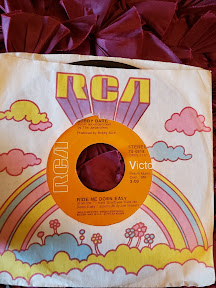 If I started a podcast, I think I would call it, "The Singles". Of course, since it costs $$$$$ to actually play music on a podcast, I guess it would just be me talking about 45's. Not such a great idea, now that I think about it.

In an effort to establish a smidgen of organization, I've been sifting through all my old LP's and 45's. Its funny, but the singles actually resonate with me more than the albums. Country didn't really become album-centric until around the 1980's, unlike rock. There was an occasional standout, like Emmylou Harris's Elite Hotel and Porter and Dolly's duet albums, but the Nashville producers hawked singles. Maybe they figured the rubes couldn't afford a $3.99 LP, but no thought whatsoever went into producing an album. Generally the album would consist of two hits and eight or nine cover songs. We buyers knew what we were getting into, and even at age sixteen, I could, yes, afford a couple of four-dollar LP's every month. Too bad Chet Atkins, Glenn Sutton, et al didn't try harder.

Thus, I bought a ton of singles. Most of them were purchased at Woolworth's, where the most popular tracks were displayed on an end cap. How much could one lose by picking up a single they "kinda liked"? Going through them today, I couldn't even remember some of the songs, but I must have kinda liked them at the time.

Somehow, included with my 45 collection were a bunch of singles my mom had bought. I'm not sure how those got mixed in. I don't remember her gifting them to me. Bless her heart, my mom wasn't a big music buff, but she tried. She handwrote "this side" on all her singles. I suspect she scooped up a sheaf of records on every shopping trip, sight unseen, then played them at home to determine which side was the best.

I, on the other hand, pressed some of my singles to my heart. There's this one: 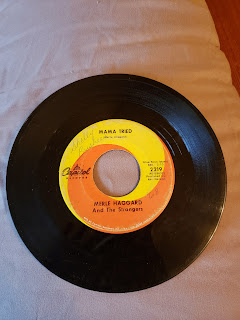 (I wrote my name on all my records and included the year.)
This record traveled many miles with me. If you read my memories of Merle Haggard, you will understand.
Short version: I had a battery-powered record player and when my best friend Alice and I discovered that Merle and his retinue had checked into my parents' motel, we dragged that record player outside, across the driveway from his room, set it up on a little table and whirled this record over and over. In my defense, I was thirteen.
Around 1970 I stopped throwing away the record sleeves like a dolt. Thus, the majority of my 45's still rest inside their original wrappings. (No, I'm not selling them on eBay.)
Looking through them today, I often knew which record I'd picked up simply by spying the sleeve. Just looking at these records I was transported back to a lovely time. Imagine if I actually played them! I have one of those USB turntable thingies, but I also have a kitten. Trying to spin a record would be an exercise in frustration, hurt feelings (on her part), and scratches gouging my previously-pristine singles.
But I will, someday. The temptation is too great, especially now that I've glimpsed those decades-old wonders.
I've always maintained that music is tied up in memories. When I spied "Ride Me Down Easy" I was immediately transported back to the post-graduation road trip Alice and I took, singing along to the radio at the tops of our lungs to drown out the wind whooshing through the open car windows.
Some of my '80's singles from my MTV days, the singles with the block sleeves and album cover-like artwork, evoke the giddy days of devouring pop music alongside my pre-teen sons. 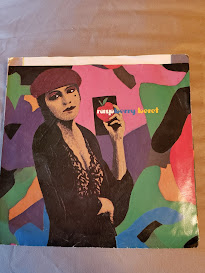 (No, I'm not just a country music geek.)
Yes, a singles podcast would be something I'd lap up, but somebody else'll need to do it. I'm poor. (And the Prince estate will slap you down if you even try to spin one of his tracks outside the confines of your own home.)
A whole podcast chapter could be solely devoted to one-hit wonders that nobody remembers -- until they hear the record.
Yea, singles. Those are my ticket.