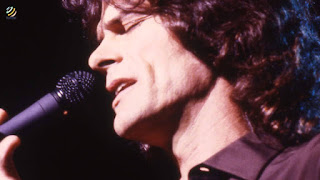 If you're a millennial reporter tasked with reporting on the death of someone you've never heard of, I guess you can rely on good old Wikipedia to inform you that the only hit single B.J. Thomas ever recorded was "Raindrops Keep Falling On My Head".

I learned about B.J. Thomas's passing this morning and musical memories began pouring out.

I was thirteen in 1968 and carrying my transistor radio with me everywhere that summer. I think that's when I first heard this guy with a sexy, relaxed, yet soulful voice wafting through the AM speaker.

I loved that song.

Later that same year, this new guy released another hit, which has been grossly overshadowed by Blue Swede's off-the-wall version (which, yes, I liked), but for pure laid back listening enjoyment, try this:

It wasn't until the following year that millennial reporter's one halfway familiar song was released. My friend and I dutifully went to the theater to see Butch Cassidy and the Sundance Kid. And yes, B.J. was correct -- the song didn't really fit the scene (or the period), but that's neither here nor there. It's a catchy, typical Bachrach pop song.
B.J. had a couple of top twenty hits between '69 and '75: "I Just Can't Help Believing" and "Rock and Roll Lullaby", but then something odd happened. He showed up on the scene as a country singer.
Far from "Raindrops" being the Thomas track I'll remember most, it's this one instead:
I like this one from 1982:
(Sorry - terrible video quality, but at least there's no stepladder.)
Some would say B.J. Thomas either had a voice that was too country for pop or too pop for country, but I say he was simply a one-of-a-kind phenomenon. Unique; not a musical appropriator.
I'm so glad we'll always have his music.
Rest in peace, B.J. Thomas.

Email ThisBlogThis!Share to TwitterShare to FacebookShare to Pinterest
Labels: another somebody done somebody wrong song, B.J. Thomas, eyes of a new york woman