The Key's In The Mailbox, Come On In 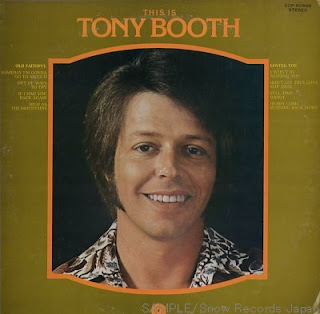 When it came to music, my dad liked what he liked. He wasn't a musical explorer. In the sixties and seventies, Dad could pick from the the offerings of AM radio...and that was it. My dad was a guy whose notion of success was buying a new car every two years. He had graduated from a used Ford Model A in the forties to the subsequent automobile upgrades of Galaxys and ultimately to the boxy casket of a gold Lincoln once his ship came in. My dad's ultimate success symbol was a shiny new car.

His seventies-era Lincoln came equipped with the newest advent in sound -- a built-in eight-track player. He bought approximately three eight-track cartridges -- surprisingly, Ray Stevens and Jerry Reed -- and Tony Booth. Every local destination he drove me to, which consisted of junior high school choral concerts he never hung around for, featured one of the three tapes, which inexplicably managed to stop smack-dab in the middle of a song and he'd have to eject and flip the cartridge over for the song to continue. I was dubious about this new technology, but everyone said it was "the thing", so I played along. It wasn't as if I had any say in the matter. I was a passenger hostage. I don't know how many times I heard Jerry Reed's "Another Puff", and it was humorous the first three hundred times my dad played it, but the sheen wore off by play three hundred and one. Dad was essentially a cheapskate when it came to laying out money that didn't involve cars, so those three eight-track tapes became imprinted on my brain pan.

Tony Booth was one singer among Buck Owens' new coterie of Capitol artists, which included Susan Raye and Buck's son Buddy, who was an even paler version of the pasty vocal talents of his father. I was a bit suspicious of this new cabal. Buck had been the premiere country artist of the sixties, but then as the decade turned he veered off into his own personal talent agency, plugging his latest finds and using the Buckaroos to cement the gaps in his artists' ability.

Dad also possessed the Capitol Records' orange and red single of this track, which he spun on his console stereo in the living room, and which sounded suspiciously like the phenomenal Don Rich was singing background vocals on (he was).

I was reminded of Tony Booth one afternoon when Willie's Roadhouse spun him. I'm not sure that Tony Booth ever recorded an original song, but Dad liked him a lot. Tony Booth is like one of those luminary bodies that pops up in the sky on a late night when one happens to awake and peers out their bedroom window. By dawn he's gone.

That's not a bad thing, necessarily. It's just the way of the music world. It would take me more than ten fingers to list the artists, many of them extraordinary, who flamed out simply because the musical universe had changed.

In honor of Dad's three eight-track tapes, here's the Jerry Reed song that eventually brittled my nerves. DISCLOSURE:  Dad was a lifelong smoker, and I guess one could now say I am, too. Maybe that's why it's not really that funny.

In honor of Dad's good taste, and mine, here's Ray Stevens:

I don't give a flying F what any of the country sites say to denigrate Ray Stevens. The album Misty is a masterpiece. Anyone who's not an imbecile knows that Ray Stevens is more than "The Streak".

So, Dad was essentially two for three. I never cared for Jerry Reed, but Tony Booth was (is) pretty good, and Ray Stevens is a treasure.

I wonder if heaven has an eight-track player, or for that matter, a Lincoln town car. If it does, Dad is happily cruising along, a Belair filter-tip balancing in the ash tray.

Music is where you find it.

Hug onto the good; giggle about the bad.