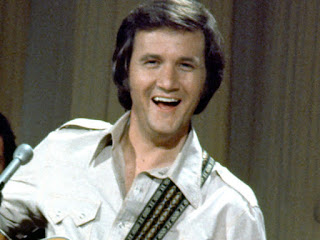 I first became aware of Roger Miller in (I think) 1964. You couldn't miss him. From '64 to '66 there was no one hotter in country music. 1964 was a time when radio stations weren't segregated by genre. We heard a little bit of everything -- The Beatles, The Beach Boys, Dean Martin, J. Frank Wilson (bet you forgot!), Manfred Mann, Al Hirt, Roy Orbison, Dionne Warwick, Bobby Vinton (!?) and Roger Miller.

In 1964 and 1965 alone, Roger Miller had Dang Me, Chug-A-Lug, Do-Wacka-Do, England Swings, Engine Engine #9, and of course, King Of The Road. You couldn't miss him. I was nine years old in 1964 and (just like now) I liked songs for their melody, not necessarily their lyrics, but Miller's words were so foreign, that even though I didn't actually understand their meaning, his songs were impossible to ignore. Part of the genius of Roger Miller's songwriting was the accessibility of his songs. Even a nine-year-old girl could sing along. He was an expert at unexpected rhymes. I knew even then that most songs were pap and only their melodies and production saved them, and I'm not excusing The Beatles here, either. I wasn't exactly jaded, but I could pick out originality. Miller's songs were unlike any other. I do believe, however, that as silly as some of those tunes were, they all had a grain of Roger Miller truth (maybe not You Can't Roller Skate In A Buffalo Herd).

But let's start at the beginning.

He was a bellhop at the Andrew Jackson Hotel in Nashville before signing on with Minnie Pearl's band as a fiddler, although he didn't know how to play the fiddle. Eventually he joined Ray Price's Cherokee Cowboys and wrote this hit for Price, which he sings harmony on below:

In fact, Roger Miller wrote tons of songs for tons of artists, from Ernest Tubb to Faron Young to Jim Reeves.

"Roger was the most talented, and least disciplined, person that you could imagine", citing the attempts of Miller's Tree Publishing boss, Buddy Killen to force him to finish a piece. He was known to give away lines, inciting many Nashville songwriters to follow him around since, according to Killen, "everything he said was a potential song." (source)

It's impossible to list all the songs Miller wrote, or the swarms of artists who recorded them. He eventually went on tour as Faron Young's drummer, though he was as much of a drummer as he was a fiddler, before at last landing a recording contract with Smash Records.

And then he exploded.

One couldn't turn on network television without seeing Roger Miller. He appeared on everything from The Tonight Show to Shindig.

(I like how Dick Clark calls him a "humorist" - I don't think Dick actually got it.)

This was self-loathing at its finest:

Well, here I sit high, gettin' ideas
Ain't nothin' but a fool would live like this
Out all night and runnin' wild
Woman's sittin' home with a month old child

Dang me, dang me
They oughta take a rope and hang me
High from the highest tree
Woman would you weep for me?

Dang me, dang me
They ought-a take a rope and hang me
High from the highest tree
Woman would you weep for me?

They say roses are red and violets are purple
And sugar's sweet and so is maple syrple
Well I'm seventh out of seven sons
My pappy was a pistol, I'm a son of a gun

I said dang me, dang me
They ought-a take a rope and hang me
High from the highest tree
Woman would you weep for me?

(Don't feel bad, Dick. I didn't get it until recently, either.)

My favorite Roger Miller tune remains the same fifty-seven years after its release. At age nine, opposed to age ... I didn't internalize the heartache in this song. Maybe the brilliant rhyming obscured my emotional cognizance. Or maybe I was nine.

But long after Roger passed away, artists kept recording his songs:

(Okay, that's gotta be the actual, real, original Roger Miller in this video.)

Roger Miller was probably the most prolific, most original songwriter Nashville has ever, or will ever see.

That only happens once in a century.

It deserves to be remembered.