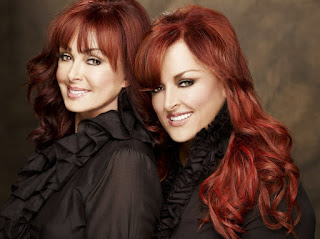 I admit, I was a year off. That's not bad, though. I had no hope nor expectation that Marty Stuart would be inducted in the Modern Era category in 2020. I simply felt it was The Judds' time.

I readily admit I completely missed The Judds' rise. I'd abandoned country music for about a decade, which was completely country music's fault; not mine. And nineteen eighties pop was really, really good; I don't care who wants to argue the point -- while country music was putrid. Sure, I missed country's renaissance, but how was I to know country that would suddenly heal itself? I'd chalked it up as a lost cause, after too many Sylvia and Billy Crash Craddock singles.

I sure didn't know about this:

In fact, I missed the best of The Judds. I did keep up with them via People Magazine, though. Constant drama is a catalyst for bad, and The Judds were nothing if not drama. I scrolled through the articles about Wynonna's marriages and Naomi's and Wynonna's squabbles. They became tabloid fodder and diminished the talent that they were. But living in the spotlight probably changes a person; makes them keen to their public image.

By the time I learned to appreciate The Judds they were almost over. Their hit-making days didn't last long, basically from 1984 to 1991, but they did score fourteen number ones in only eight years.

A few of their better recordings:

To be eligible for the modern era category, at least twenty but not more than forty years, must have passed since the artist reached national prominence. What this means is that The Judds beat out the obviously most deserving candidate, Dwight Yoakam. The Country Music Hall Of Fame and Nashville in general has long had a bias against Bakersfield artists (Merle Haggard simply could not be ignored), so it will be interesting to witness the HOF twists themselves into knots in the future to NOT induct Dwight.

I rarely agree with the Hall Of Fame choices, but I don't begrudge The Judds. They simply could no longer be ignored by whoever the mysterious HOF voters are. I will say, however, that three superior recordings do not necessarily elevate an artist to hall of fame status. But no one can deny that they left their imprint on country music.