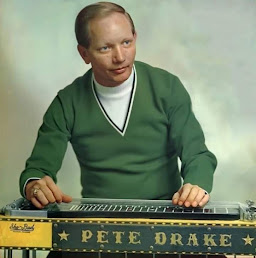 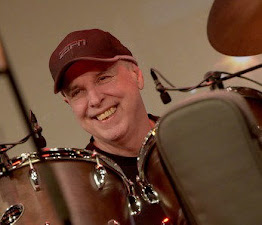 No, Don Rich wasn't inducted into the Country Music Hall Of Fame in the Non-Performer, Songwriter, and Recording and/or Touring Musician category (again). That anti-Bakersfield bias lives strong within the mysterious HOF voters. But is there any other sideman more famous than Don Rich? (answer: no) But of course, Don Rich died in 1974, so those mysterious voters no doubt assume that everyone's forgotten him.

So, we have a tie this year: Pete Drake and Eddie Bayers. Funny how the HOF can sometimes induct more than just a single artist.

Before Lloyd Green came along, Pete Drake was the most famous studio steel guitar player in country music. He played on hits such as Rose Garden, Behind Closed Doors, and Stand By Your Man, among innumerable other tracks, hits and non-hits. His fingers must have gotten awfully sore.

Drake passed away in 1988, which means Jerry Lee Lewis only has about thirty-three years (at age one hundred and eighteen) until, he, too, gets honored.

I almost didn't include Pete Drake's more creepy side, but any summation of his career would be incomplete without his infamous "talk box". Of course I was a kid when I first heard this on the radio, and it was the stuff of nightmares. Nice little novelty, though, I guess.

Regardless, Pete Drake deserves his due.

Eddie Bayers, on the other hand, has no creepy proclivities that I'm aware of. Eddie has played on tracks by artists ranging from Tanya Tucker to Reba to Garth to George Strait. He also was a member of the Notorious Cherry Bombs, and played on tracks such as this:

On the plus side, at least Eddie is still alive to enjoy the honor.

Still mad about Don Rich, though.