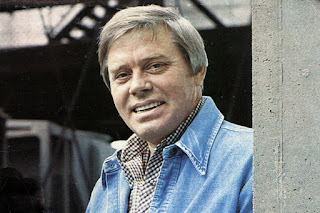 The first time I became cognizant of Tom T. Hall was via a hit record that I quickly grew to hate:

It was one of those tracks that intrigues you the first time you hear it, but over-exposure bakes in its more annoying features, like the dobro riff that completely devalues a wonderful instrument like the dobro.

Nevertheless, I don't even know how I knew that Tom T. Hall wrote the song, nor did I have a clue who Tom T. Hall was. Radio in 1968 didn't exactly tout the writer of a hit song. Maybe his name stuck in my head because he, like Jeannie C. Riley, incorporated his middle initial into his name.

As I became more cognizant of him as a pre-eminent country songwriter, I noticed something odd -- his songs rarely included choruses. They were a series of verses, prose; a narrative story. They didn't fit the verse-chorus-verse-chorus structure that everyone in music understood was the norm. Yet somehow they worked. Often the listener didn't notice there was no chorus. The most one could claim about Hall's songs was that they included a "refrain".

I suspect Tom T. was a frustrated novelist. Yet he had the magic spark that spun his songs into gold.

I've written before about the first country song I actually swooned over the first time I heard it late one night on a scratchy signal from Ralph Emery's WSM:

It may have been simply because it was Faron or perhaps it was the arrangement, or both; but I can't deny that this track clutched my heart. And Tom T. Hall wrote it.

Then I found out that Hall also wrote this:

And this:
(This one actually does have a chorus)

I bought a Tom T. Hall album. Not sure why, but I bought a lot of albums, basically whatever was available in J.C. Penneys' basement in 1968 - 1971. I think it might have been because I liked this track:
I confess I never understood Hall's songwriting method, but no one can deny that it worked. Somehow. Few can go against the grain and yet produce something timeless.
And I'll always be in his debt for giving me my first country music swoon.
RIP, Tom T. Hall, who passed away on August 20, 2021.
"Old dogs care about you even when you make mistakes
God bless little children while they're still too young to hate"
When he moved away I found my pen and copied down that line
'Bout old dogs and children and watermelon wine