Jay Black ~ Jay And The Americans 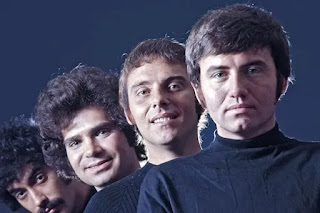 I was eight years old in 1963, too young and poor to buy my own records, but I had a nine years older brother who managed to buy every album and single that was hot. Plus my brother seized the kitchen radio and tuned the dial to the local rock (okay, pop) channel. Without him, left to the devices of my mother, I guess my earliest musical memories would have consisted of Perry Como and Eydie Gorme.

I was thus fascinated by Jay and the Americans, because this Jay did not have a rock 'n roll voice -- at all. To my young mind, he sounded exactly like what an opera singer would sound like. And in fact, he did. I was at the age when everything is fascinating or supremely important; when a kid needs to suss out what the heck is going on. And this guy just didn't fit in with the likes of the Beach Boys or the Four Seasons. This "Jay American" really belted it out!

"Jay's" actual name was David Blatt, and he took over for the original Jay (whose real name was Jay) in 1962, and that's when the group took off.

It wasn't all about seismic vocals, however. In 1964, the same year that Come A Little Bit Closer was a hit, Jay and the Americans also released this:

As rock (or pop) came into its own with guys who most certainly didn't sing like New Jay, the group continued to chart well into at least 1968, but they frankly sounded out of touch.

The group's last real hit came that year with a cover of the Drifters' song:

(Sorry, only performance video I could find)

They say that "Jay" maintained those powerful vocals well into advanced age, and yes, he did:

From starting out as a curiosity that eight-year-old me was compelled to ponder to a phenomenal vocal talent that little kids fail to recognize, David Blatt's was a rare, powerful voice.
David (Jay Black) Blatt passed away on October 22, 2021 at the age of 82.
Rest in peace, Jay.

Email ThisBlogThis!Share to TwitterShare to FacebookShare to Pinterest
Labels: david blatt, goodbyes, jay and the americans