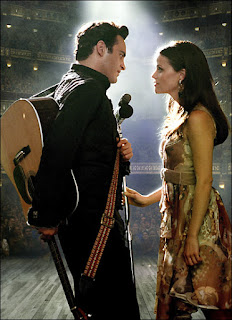 The Peacock app doesn't offer a lot of selections. I've watched the entire eleven-season run of Modern Family, rewatched all episodes of The Office, rewatched Downton Abbey, and even labored through Everybody Loves Raymond's full nine seasons. So now, unless I want to view corny seventies sitcoms, I'm left to pick through Peacock's paltry movie options.

Which brings me to I Walk The Line. I saw it before, but didn't pay much attention to it, other than to critique Joaquin Phoenix's musical portrayal. I am now watching it again, and about halfway through I've reached the conclusion that I really don't like this Johnny Cash.

I know that biopics are not real life. Mooney Lynn looked nothing like the young Tommy Lee Jones. I also know that Johnny and June's son John Carter Cash was an executive producer of the film, but it seems that he advocated for a false narrative of his parents' long relationship. For example, much as the movie strives to portray Johnny's first wife Vivian as an unsupportive spouse, resentful of his burgeoning career, I found her character to be one of the few sympathetic portrayals in the film.

And much as Reese Witherspoon's June is an absolute angel, the truth is it was she who pursued a married Johnny, not the other way around. Again, however, John Carter certainly didn't want to besmirch his mother's memory.

Aside from glaring chronological errors (I'm not even a Cash fan, but even I know when certain songs were recorded), the portrayal of Jerry Lee Lewis is...odd. No one can seem to capture the real Jerry Lee; not even Dennis Quaid, who embodied a spastic, endlessly mugging Lewis in Great Balls Of Fire. Someday maybe a decent film will be made about this seminal artist. Carl Perkins, at least, is represented as the reportedly decent man he actually was, albeit one who has a fondness for blowing things up. And the film seemingly just pulled some dark-haired stranger off the street to play Elvis, who possessed zero charisma (in the film) and was a pale pretender next to the great J.R. Cash.

If the real Johnny Cash was as much of a jerk as the movie depicts him, those hipsters who cite him as their favorite "country artist" might want to rethink their heroes.

As fiction, I do give the movie a B minus. The lead actors do a good job in what amounts to a country music soap opera. But again, I don't have a lot of movie choices.