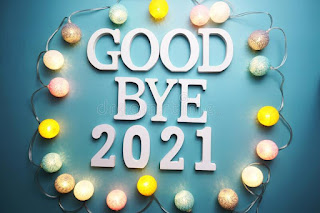 The thing about being retired is that there are no mile markers. Shoot, I often even forget what day of the week it is. When one is gainfully employed, they're working for the weekend. Three or four-day holiday weekends are the best. Sure, Mondays suck, but there's always a reprieve just a few days away. This is a long-winded way of saying I don't really know what the heck happened in 2021. The days all run together. With Covid, my big outing is weekly grocery shopping.

When I was first working from home after Covid hit, I tried to summarize in a blog post the things I learned each week. So I'll try that for the year 2021.

It seems I didn't learn a ton of things in 2021. Quality trumps quantity, however. Every year has little milestones that might actually be big milestones. My life in 2021 wasn't bad, all things considered.

I don't know what 2022 will bring. Maybe I will become a world-renowned artist, or at least pick up my never-used art pencils and draw a picture. I could do that.

Or I could stream The Office again.

Email ThisBlogThis!Share to TwitterShare to FacebookShare to Pinterest
Labels: 2021 in review, musical tastes, pets, the office, things I learned in 2021, walter kirn, writing