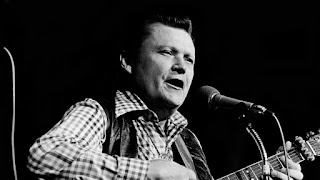 Nineteen fifties country music was even before my time, but thanks to country radio (the way it used to be) I still managed to become familiar with many of the fifties and early sixties hits. To say country music was different in the fifties is like saying that what passes for country music now bears any resemblance to actual country. While admittedly there were some great singers making the charts like Ray Price and Faron Young, fans mostly gravitated toward what we might call "stylists", artists who were barely competent singers, but whose voices were instantly recognizable when they exploded out of the local tavern's juke box. For one, Hank Williams was still charting in the fifties, and his voice was nothing to write home about. Add in Webb Pierce, Carl Smith, and yes, Stonewall Jackson. That's not a knock. It was, in truth, mostly about the songs.

And Stonewall chose and even co-wrote some good ones. According to Wikipedia (if you can trust that) Jackson's two number ones were both songs I didn't particularly like - Waterloo and BJ The DJ. However, he had much better ones, like this:

And this one is my favorite, although the performance could use some improvement:

A Wound Time Can't Erase
Others:
I Washed My Hands In Muddy Water
Help Stamp Out Loneliness
In hindsight, I guess Waterloo wasn't that bad. Not good, per se, but not awful:
Not many of the fifties giants remain. Marty Robbins is gone, Faron is gone, Ray Price is gone. And on and on. It was a time unique in musical history and I'm glad it's been preserved.
Stonewall Jackson passed away on December 4 at the age of eighty-nine. Thanks, Stonewall, for contributing to the advent of country music.
***********************************
My fifties country playlist:
at December 05, 2021