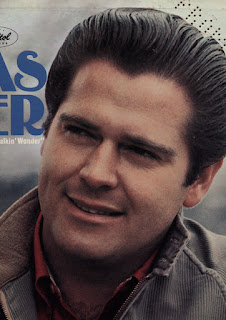 The first time I saw Dallas Frazier's name was in the liner notes of Connie Smith's "The Best Of Connie Smith" album in 1967. 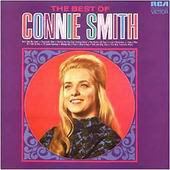 Thereafter, his name kept popping up, like on this one: 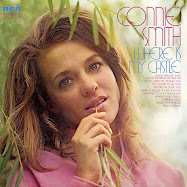 Before long his name was everywhere. As one who was coming to country music as a neophyte, I paid attention to "important" names. It seemed this Dallas Frazier guy was important.

So, I met Dallas Frazier via Connie Smith.

Frazier started out as a prodigy vocalist, at age fourteen, then went on to write novelty songs like Alley Oop, recorded by the Hollywood Argyles in 1957. It wasn't until he moved to Nashville that his songwriting career took off -- and boy, did it. Different songwriters dominated the country scene depending upon the era. In the late fifties/early sixties it was Hank Cochran and Harlan Howard. By the mid-sixties/early seventies Dallas Frazier assumed the mantle.

(rendered by the songwriter himself)
Naturally, this is the song that is Dallas Frazier's claim to fame:
(Oh, you like it; admit it.)

I readily admit I don't know every single song Dallas Frazier ever wrote. But this one is probably my favorite:

(sorry, no decent live performance to be found)

In 1976 Dallas Frazier retired from the music business and became an ordained minister, which is sublimely cool. As poetic as his written words were, I bet he gave a helluva sermon.

Dallas Frazier passed away on January 14, 2022, and the country angels cried. I'm sure he saved some souls along the way, whether through his preaching or via my preferred way ~ a crisp, succinct musical message.