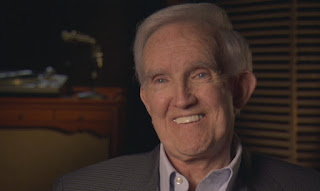 When I was a young teen and a newly-minted country music fanatic, there were three late-night disc jockeys who mattered. These guys broadcast over clear channel 50,000-watt radio stations and thus, once midnight hit, if one was lucky and the sky was starry she could tune into two and sometimes all three channels. On summer nights, I would first try 1040, WHO with Mike Hoyer at the helm. This station was my safest bet. It was closest geographically to me and Mike never failed me. His catchphrase was "from coat to coast and border to border and then some." Mike's trademark was playing entire new albums starting around two o'clock in the morning, which is how I first became familiar with the latest releases by Tammy Wynette and Charley Pride, among others. Mike was a straightforward country music lover. He didn't chit chat; he simply introduced the music and offer a few tidbits about the track or the artist.

820 on the dial, WBAP was a bit scratchier, but Bill Mack's voice eventually became clearer as the night went on. There was no doubt where Bill's heart lay. He championed Texas artists, who became my favorites as well -- Johnny Bush, Cal Smith, and of course Ray Price. Bill's style was looser than Hoyer's. One could picture him leaned back in his chair, chawing with the truckers who obviously worshipped him. Bill's voice was like what I imagine smooth whiskey would taste.

WSM was the air castle of the south, and Ralph Emery was the king of the manor. At 650 on the dial and located in Nashville (with many many radio frequencies between my home and Tennessee jamming the airwaves) Ralph's show was a rare capture. Ralph was a jocular easy-going host, which was why so many country stars felt free to stop in and spend the night jawboning in his studio. I heard Marty Robbins one night banging on the piano, performing a de facto concert.

It was via Ralph's show that I first fell in love with some country singles that I am in love with to this day. 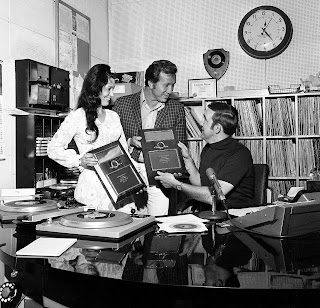 In the eighties when TNN (The Nashville Network) came along, who but Ralph Emery could emcee the network's signature show, Nashville Now? I watched it every night, and I wasn't all that into country at the time. Everyone appeared on Ralph's show -- everyone -- from a tipsy Faron Young to the latest unsigned act (which, by the way, included some guy named Randy Travis who was working as a short-order cook). I was giddy when my favorite local bar band appeared one night. They'd recently signed a major label contract, and though their career ended up going nowhere, I was euphoric that a band I actually knew performed on Ralph Emery's show.

Before Nashville Now, Ralph had a syndicated half-hour show called Pop! Goes The Country! That was the first time I caught Lynn Anderson singing an obscure Stonewall Jackson song and fell in love with it (I already loved Lynn Anderson).

Ralph Emery was a country music facilitator; a shaman, a guru. There are very few country stars alive today who don't thank their lucky stars for Ralph Emery.

Ralph Emery was with me most of my life. How many legends have most of us spent our lives with? He is country music to me. Mike Hoyer's passing in 1999 didn't merit a word in country music journals. When Bill Mack died in 2020 most writers focused on his authorship of LeAnn Rime's "Blue".

Ralph Emery passed away on January 15, 2022 and was thankfully given his due (although I will note that WSM's website has no mention of him -- shame and disgrace on you, WSM).

For the uninitiated, it's impossible to describe the impact he had on country music. I guess you had to be there.

Rest in peace, Ralph Emery. Those who are in the know love you.