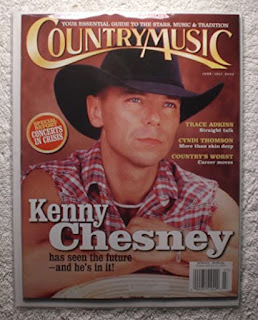 I more or less stopped listening to country music in the year 2000 (thanks, Faith Hill), but I still had a toe dipped in the world of country radio. It's only fair that if I review "new country" I apply the same standard to the country music of twenty years ago.

My rule of thumb is, I review the tracks as if this is the first time I've ever heard them, and in some cases, I actually haven't heard them before (or I don't remember them from merely their title).

What the weekly charts prove is that hits are fleeting. One would assume that if a track makes the top ten, the song will be memorable. That's hardly true. Often even the artist isn't memorable. And often the artist has since become a household name, but the song on the charts is subpar -- simply another notch in their belt of hits -- a minor notch.

I will state for the record that country began its downhill slide at the turn of the century and has not (yet?) recovered. I was right to abandon it.

This is not a bad song (the live concert video kind of ruins it). I will try to ignore the video and concentrate on the song. This is definitely country, in the vein of George Strait. In fact, George must have turned this one down, although his arrangement would have been more pleasing to the ear. I was curious and looked up the songwriters: Jeffrey Steele, Al Anderson, and Craig Wiseman (thus ushering in the needless practice of requiring three people to write a song). Steele actually did write a Strait hit, the misspelled, Love's Gonna Make It Alright; while the other two writers have penned numerous hits. The message of The Cowboy In Me follows the time-worn tradition of the cowboy as a maverick, a loner.  It's a pleasant song, although I would not lay down money for it.

This track was hard to get through, but I promised I would listen to the entirety of each song, so I did. It's not that I'm offended by the message, like some of a particular political persuasion no doubt are. It's just that it's boring and repetitive. It's a novelty song. And the rap does it no favors. Needless to say, I wouldn't purchase it, because I have better taste than that.

Immediately I'm struck by the awful arrangement. But aside from that, this is certainly not country, unless one considers a Jimmy Webb song country. I checked and neither Brooks nor Dunn wrote this, and it shows. I doubt that the duo includes this one in their concerts, but who knows? Apparently they like it or they wouldn't have slapped it on an album. The guys should stick with country music.

#7 ~ Bring On The Rain ~ Jo Dee Messina and Tim McGraw

See? This is how Faith Hill ruined country. She even got her husband to chime in on this track. I'm searching to find a hint of country in this, but not succeeding. The singer is pretty good, but she has a country voice and needs to find songs that fit it. As a song, it's passable. As a country song, it reeks of failure.

This track is inoffensive, like a marshmallow. It's more sixties pop than country, but maybe that's what the singer was going for. Certainly not a single that will stand the test of time. It's almost as if the singer is at the tail end of his recording career and is just throwing stuff against the wall, not caring if it'll stick.

This song takes the award for the longest song title in country. The singer's heart is definitely in the right place, but this is no "God Bless The USA". I don't hate it; I don't love it. I would be satisfied only hearing it once and then forgetting all about it. An "A" for effort, but...

MY RATING: B- (and that's grading on a curve)

I like it. The chorus nails it. Apparently this is a singer who understand what country music is supposed to sound like. I have no quibbles with the song, the singer, especially none with the arrangement, which is kind of a mashup of Yoakam and Owens. Would I buy it? YES.

The singer's voice is definitely easy on the ears. Not the countriest country song I've ever heard, but the singer carries it. I prefer my country a bit more hard core. One thing that can be said about the singer is that he has a presence, almost like a king. Watch the reverential way the audience hangs on his every syllable. I wouldn't buy it as a single, but it makes a decent album track. I suspect he is capable of much more.

#2 ~ Where Were You (When The World Stopped Turning) ~ Alan Jackson

Again, not the best representation of what I suspect this singer is capable of, but as a touchstone, I doubt there is any song that better represents a particular moment in time. Clearly, this song is heartfelt. I wouldn't buy it, but I don't turn the station when my local radio station spins it. I predict a long career for this guy.

Not crazy about this. And the singer somehow reminds me of Dwight Shrute (although one would only notice if they watched the video). This is one of those pandering ballads that pretends to know how men talk to women. This is the first and last time I've heard the name Steve Holy, but all the best to him, I guess. Would I buy this? LOL.

So, there you have it. Country music wasn't completely dead in 2002 (witness Brad Paisley), but it was mostly dead. It still beats 2022, but that's a low bar. Even Dwight Shrute beats 2022.

This exercise helps to put country music in perspective. And helps us to know how it declined and who was complicit in its downfall.