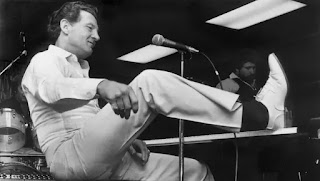 I used to chirp incessantly about why Bobby Bare wasn't in the Hall Of Fame. Then at last in 2013 he was. Honestly, don't even get me started about dolts who have zero sense of history and lackluster taste in music. So because of me and me alone 😀 Bobby Bare finally got his due.

Then eventually it struck me like a bullet ~ Jerry Lee Lewis isn't in the Hall Of Fame? What kind of bizzaro universe are we inhabiting? And more significantly, who exactly comprises this super-secret cabal of decision makers? Even the Rock and Roll Hall Of Fame puts its nominees up for a vote.

I don't like it. These guys and/or gals are obviously not taste-makers. Do they get payoffs? We'll never know ~ it's a "secret".  And only three inductees per year, with one of them not even a performer? At this rate Dwight Yoakam will be inducted sometime around 2098. It doesn't matter to the HOF syndicate, though. They like waiting until someone is dead before inducting them. Ghouls.

Growing up, I paid scant attention to Jerry Lee. His rock and roll hits came before my time, but boy, when I heard them on the radio ~ WHEW! Jerry Lee wouldn't allow you to ignore him.

There are few true originals in music, any genre of music. It's true. In country, many would proffer Johnny Cash and I don't disagree, although I'm not about to spin Five Feet High And Rising anytime soon. Loretta Lynn, maybe. Willie? Okay. But, trust me, you ain't ever gonna hear anyone anywhere close to Jerry Lee Lewis in your lifetime.

What Jerry Lee had (has) other than celestial talent is attitude. A stylist? You bet your ass.

Can you envision another country singer delivering something like this?

Have you ever seen someone so casual with so much presence? "Yea, here I am. I don't need to impress you. Just fuckin' listen."

There's a scene in that bad Dennis Quaid movie, "Great Balls Of Fire" in which Jerry Lee finds out he's not the headliner on a rock and roll package show that night and he says something to the effect of, "nobody outguns The Killer". And he proceeds to wipe the floor with Ritchie Valens or whoever the flavor of the month happens to be.

Note: I don't give a Goddamn about Jerry Lee's personal life. This isn't Emily Post ~ it's the Country Music Hall Of Fame.

Congratulations, Jerry Lee Lewis, who at the age of eighty-six has finally (finally!) been inducted into the hallowed hall.