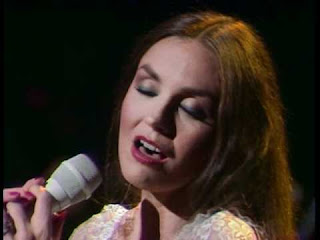 For years I denigrated seventies country music. Bear in mind, though, all we had in those years was radio (mostly AM radio) and just like today, radio stations essentially spun the top twenty singles in constant rotation. So, for example, in 1976 we heard Dave and Sugar and Billy Crash Craddock and Freddy Fender with his plunky acoustic guitar. Over and over.

Not to mention Mary MacGregor with her "Torn Between Two Lovers" (definitely not a country song) and Elvis's bombastic "Moody Blue". Seventies country radio accepted all comers. That was the problem.

That's not to say I didn't buy country singles. I was poor enough to barely afford those, but I plucked them from the Woolworth's end cap four or five at a time. Still, I was feeling surly toward country. I didn't buy Good Hearted Woman by Waylon and Willie on principle. I shuddered at the sight of Mickey Gilley singles; Urban Cowboy be damned. I never once purchased a John Denver single. Artists I'd loved for years, like Johnny Rodriguez and even Merle, were now issuing crap, and I refused to lay down money for an inferior track based solely on sentimentality. I was a stern musical taskmaster.

Crystal Gayle was kind of a freak of nature. I knew she was Loretta Lynn's little sister, but face it, the reason people stared in awe at Crystal on their TV's was because of her four-foot long yardstick locks. They were like a second person

Everyone, I guess, needs a life goal, and Brenda Webb's (Crystal's) was growing her hair out as long as grotesquely possible. Catching her on the tube, it was hard for me to concentrate on her songs, because I was completely mesmerized by her hair.

Crystal first caught my attention with a track that oozed like maple syrup into everyone's brain in 1977. Suddenly she was everywhere. The song wasn't exactly country. It was something, but it wasn't country.

I found her affectation artificial, especially since she started out sounding like this:
Nevertheless, this new Crystal Gayle was off to the races.

But the artificiality of it all riled my purity senses. I wasn't ready to let country disappear, For the same reason that I abhorred John Denver and skirted past The Eagles, I rejected this woman who pretended to be something she wasn't. Yes, I enjoyed Olivia Newton-John's "Let Me Be There" and "After The Lovin'" by Engelbert Humperdinck, but I never claimed they were country.

Thus, I missed a few Crystal Gayle gems. Like this one:

But this next Crystal track is quintessential. Richard Leigh wrote it, like he wrote Don't It Make My Brown Eyes Blue and these:

I didn't recognize the perfect fusion of song, production, and performance until decades later. Interestingly, this is the most country song Crystal Gayle recorded in her fleeting career.

One must experience it on vinyl:

And you don't even have to be distracted by her hair.

So, granted, seventies country wasn't all bad. In fact, the decade produced a ton of seminal music.

In future posts, I'm going to highlight that ~ if only to purge my demons.