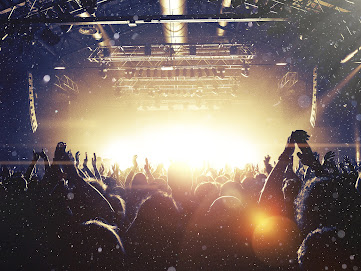 The evolution of country concerts is remarkable. I've seen almost every major country act live up to the point at which country ceased being country. I have very few regrets -- acts I didn't get to see. Some of the omissions were my fault; others simply weren't in the cards.

I grew up in a small town, where the most exciting diversion for a thirteen-year-old was bowling a few games at Midway Lanes or taking in whatever Elvis movie was playing at the local theater. (Yes, there was one movie. Multiplexes were yet to be invented.) I'd refashioned myself as a country music fan because my new best friend was a country music fan. In the late sixties we were rather outcasts because of that, but I probably would've been an outcast anyway.

There was one venue in town that presented country concerts, the World War Memorial Building, an ancient cement edifice with a wide staircase of concrete steps leading up to heavy wooden doors. The auditorium may have had one set of bleachers -- I don't remember -- because Alice and I always managed to get front row seats on the floor. We were kids. What else did we have to do but show up two hours early and stake out our positions in that non-reserved seat era? Alice and I attended nearly every concert presented there. It didn't matter if the artist belonged to the timeworn past, like Ernest Tubb or Kitty Wells, or was a legend like Buck Owens and the Buckaroos, or was someone just beginning to make his mark, like Charley Pride. We didn't care. Tickets were cheap and what was the alternative?

If one was to take in a Merle Haggard concert, the ripest time to do so was 1968. Mama Tried was in constant rotation on the radio, and Merle already had a long rope of hits, from I'm A Lonesome Fugitive to Sing Me Back Home. Alice and I were in love with him. We arrived at the venue extra early and snagged our hard metal chairs on the aisle of the first row. We waded through the opening acts, Freddie Hart and some other lost-to-time artist; then Merle strode to center stage. With The Strangers and Bonnie Owens behind him, this impossibly handsome man proceeded to sing just to us. Or so it seemed. I sat crunching peanuts, mesmerized, then realized he was smiling directly at me. I smiled back widely with peanut skins pasted to my molars. After the concert Alice and I went around to all the artists, band members included, and got their scribbles on sheets of paper we'd hastily grabbed before leaving home.

The WW Memorial Building was where we also saw George Jones bring a blonde singer back to the stage to sing some very electric duets with him. The guy strumming rhythm guitar behind them grimaced and I had no idea I was witnessing a real-life soap opera. I later learned that this new girl, Tammy Wynette, had fallen for George, and that her long-suffering husband strumming behind them had suddenly been relegated to background scenery.

By 1970 my town had built a brand new real concert venue, the Bismarck Civic Center. It was cavernous, with miles of upper tier bleachers and actual padded seats. The first concert I took in there wasn't country. It was the Grass Roots (Was Creed Bratton from The Office part of the group then? Couldn't tell you.) But later, country acts were bused in. I probably saw Alabama three thousand and fifty-two times, give or take, at the Civic Center. Eventually though, this building encapsulated the entirety of my country concert experiences. Name one country artist from the seventies/eighties era and I most likely saw them -- Ronnie Milsap, Gary Stewart, Vince Gill, Alan Jackson, Trisha Yearwood, Reba McEntire when she was still performing at rodeos.

Still, I had to travel a hundred miles to the North Dakota State Fair to see Faron Young, The Oak Ridge Boys, and Highway101.

I even motored to rural county fairs to see the likes of Stonewall Jackson and LaWanda Lindsey.

There arrived a point in the late seventies at which I gave up on country music. It wasn't easy, but it had to be done. It was time to make a clean break. Country had become a parody of itself. Charley Pride was recording versions of pop hits, and acts like Sylvia and Dave and Sugar permeated the airwaves. I tuned my television to MTV and didn't look back.

Then sometime in the mid-eighties my parents talked me into attending a concert with them at the Civic Center by some guy named Randy Travis. I folded my arms across my chest and pouted my way through the first two or three songs. I never admitted it to them, but this Travis guy was actually pretty good.

My parents also inadvertently introduced me to a fresh-faced singer, another of their latest fads. I happened to stop over at their house one night when they'd already plugged in a VHS tape and were mesmerized by an artist I'd never heard of. His name was George. I sat down on their couch and muttered disdainful remarks, until I finally shut up and actually listened.

A few years later my ultimate quest peaked at Fargo, North Dakota, where I finally snagged the holy grail -- a concert by The King, George Strait.

I'd motored all the way to Billings, Montana to seize this once-in-a-lifetime chance, only to learn after checking into my cheap motel room that a sudden snowstorm in Wyoming had stranded George and his crew and that the Billings concert was canceled. There was absolutely nothing to do in Billings, Montana -- literally nothing -- except play video poker on bar-top consoles, stagger back to the motel room, fall into restless sleep, then zoom across the barren landscape the next morning as fast as I could back home, crestfallen.

It wasn't until a couple of months later that I learned The King would be in Fargo. I'd come this far. This time I would not be refused. It was worth the wait.

I passed on a chance to see Shania Twain, even though the Civic Center was only a five-block trek from my home. Singles from her first album were popular on the radio, but I still hadn't decided if I liked her or hated her. Too late, I determined I liked her.

I walked out on a Hank Williams, Jr. show, the only time I ever walked out of a concert, except for a three-artist bill with Vince Gill, George Jones, and Conway Twitty. No offense to Conway fans, but I just could never stomach him.

Here and there, hither and thither, I caught other acts. I saw Marty Robbins in Duluth, Minnesota. I also saw Kenny Rogers there with my parents.

When I was eight years old, I saw Loretta Lynn and her band perform at Panther Hall in Fort Worth, Texas. Panther Hall was a revelation. It was a de facto dining hall with elongated white-clothed tables, and one was required to cart in their own booze. The hall provided mixers but sold no alcohol. I dutifully ordered the steak and a salad with "no dressing", which flummoxed the waiter. (I was eight.) I somehow secured Loretta's autograph, which looked to me like "Buffalo Lynn".

When I was five years old my mom took me to my first country concert at the Grand Forks Armory by the afore-mentioned Marty Robbins. I remember he sang A White Sports Coat, and I remember that my mother nudged me after the show to go up and get Marty's autograph, but I demurred, too shy and self-conscious.

In 1999 I saw Marty Stuart perform The Pilgrim at the Orpheum Theater, then saw him again at the Medina Ballroom with his band, The Fabulous Superlatives.

I caught a binoculars-required Brooks and Dunn performance at the Target Center.

I saw Dwight Yoakam two or three times throughout the 2000's (He was worth repeat viewings).

The second best concert I ever saw was at a small venue, a casino. Diamond Rio had long been in constant rotation on my CD changer, but nothing I'd heard on CD compared to their live performance. Unlike Alan Jackson, who radiated an "I don't give a damn" attitude throughout his Civic Center appearance, Diamond Rio was on fire! There's no feeling like sitting in the second row of a tiny theater as Marty Roe and Jimmy Olander and Gene Johnson sang and played just for me.

But the very, very best concert was the one I attended with my mom. It wasn't that I was in love with Garth Brooks. I was a definite agnostic. And I don't even remember how it happened that we found ourselves in the third row of the Civic Center. The concert wasn't memorable for its theatrics, although there were plenty of those. It was the absolute joy on my mother's face. I think the two of us stood for the entire two-hour show. That was the last intimate moment my mom and I spent together and I savored it.

And so it was that my mom took me to my very first concert when I was five and that our musical life came full circle.

No, I never saw Waylon. I don't think I saw Johnny Cash. If I did, I've forgotten it. I never got to see Mom's favorite singer, Ray Price. I'm pretty sure I caught Porter and Dolly, but my memory bank is somewhat fuzzy. Likewise, Mel Tillis. I wish I could have seen Lynn Anderson and Connie Smith and alas, Jerry Lee Lewis.

I did see the Nitty Gritty Dirt Band at some kind of trade fair and they were wondrous.

At thirteen I came this close to witnessing Bobby Bare in person, but a freak snowstorm forced Alice's brother to drive us home early, so I was forced to watch Bobby on a squiggly local TV feed.

Admittedly I've forgotten many of the artists I saw in person, and it's likely they've been forgotten to time as well. I sat through many, many opening acts in forty-odd years of concert-going -- one-hit wonders and no-hit wonders.

I wouldn't undertake the headache and dollars to endure a country concert today. Face it, I've seen the legends. Would a second George Strait show equal the thrill of the first? Not a chance. The quest was part of the reward.

I have the sweet sensation, however, of hearing a certain track on Spotify and remembering the time...