Me And The Seventies 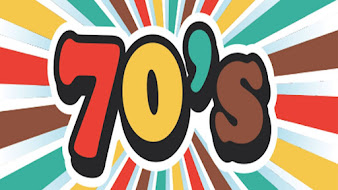 I'm not sure why I have a love/hate relationship with the decade of the 1970's. Truthfully, it was the most impactful decade of my life. I was young enough to experience every moment; not yet so old that the years ran together like a muddy river.

I came of age in the seventies. I was still a high school girl from '70 to '73; I got married for the first time in 1974, and I became a mother twice over between 1976 and 1978. I also landed my first "real" job and quickly learned that work was something to endure rather than enjoy. It wasn't fulfilling; it was a slog ~ a slog of menial tasks and a morass of neurotic coworkers.

Maybe I've dismissed the 1970's because I didn't particularly like the person I was then.

If "clueless" was an actual term back then, clueless was my middle name. I was painfully naive about life. Not that it was necessarily my fault. My family wasn't exactly The Cleavers. In fact, my dad, if he worked at all, played at being a part-time bartender. But truth be told, he spent most of his time planted on a stool on the other side of the bar he owned. Thus my mother was perpetually angry. She'd carefully mapped out a way to better their lot in life by abandoning farming and purchasing a business, a motel/bar combo, but she ended up doing all the work while my dad played. Everybody always knew my dad was an alcoholic, but he kept the demons at bay simply by the responsibilities of planting and harvesting the wheat and potato fields. Give him a bar right next door, however, and a woman who could be relied on to shoulder all the work, and he was lured to whiskey like a child offered candy from a pervert in a van.

Thus my home life consisted of pots and pans slamming and a cold shoulder. I escaped to the quiet of my room and fashioned my own sanctuary. I had one actual friend and a handful of acquaintances I only interacted with in the school hallway or in whatever classes we happened to share.

My inner life was consumed by the music I let wash over me. I collected albums and cheap electronics, like a JC Penney reel-to-reel tape recorder and a "stereo component set", which set me back an outrageous hundred dollars, which I'd amassed from my many summer hours of cleaning motel rooms. I stayed up 'til three or four in the morning during summer vacations, my ear glued to the radio, the third component of my new stereo setup. I tuned the dial to WHO and WBAP and if the heavens allowed, WSM. I fancied myself a singer and recorded three-part harmonies on my reel-to-reel. (I actually wasn't as bad as I thought at the time.) I typed up music "newsletters" on the manual typewriter I'd somehow claimed from my mom, who'd bought it with the intent of producing motel invoices.

My life was insular.

So, I never learned much of anything except how to swish out a toilet and make hospital corners. I could fry up a grilled cheese sandwich and stir together some Kraft macaroni and cheese, which I did whenever my mom was busy manning the motel desk and Dad was, naturally, indisposed. Nobody at home ever talked to anyone else. I had a little brother and sister, who I think I must have conversed with at some point, but they were little kids, after all. How much could we have in common?

I was on my own, a strange amalgam of independence and naivete. Anything I learned, I discovered through experimentation and failure. My mom never went clothes shopping with me or taught me about makeup. I employed my talent for observation to simulate what the other girls my age were doing and I mimicked them.

I did learn how to smoke, however, all on my own. Smoking wasn't so much cool, per se, as it was another means of escape.

The music that dominated my senior year in high school was an incongruent mix of country at home and rock blaring from the car radio of my best friend's beige Buick (No, I hadn't yet learned how to drive, either). Alice and I dragged Main Street on Friday and sometimes Saturday nights, singing along to Stuck In The Middle With You and Drift Away and The Joker.

Our tastes in country singles matched, too ~ Ride Me Down Easy, Southern Lovin', Here Comes The World Again.

I met my first husband on one of those Main Street runs. I thought the friend he was with was better looking, but the four of us matched up more or less according to height.

My future husband was older and had lived on his own, so he knew how to cook, whereas I did not. I could man a mean vacuum cleaner, though. We married in 1974 and since no one we knew actually rented an apartment, the thought never even crossed our minds. Instead we trudged down the highway from my parents' motel to a mobile home lot and were bamboozled into paying far too much money for a 12 by 66-foot tin box. I was thrilled. Finally something of my own that didn't require proximity to two crazed ultimate fighters.

We furnished our home with a Sears green and white flowered sofa and a set of K-Mart tables, among other cheap amenities. K-Mart and Woolworth's were my go-to's for curtains and bedspreads and collapsible nightstands. I brought my bed and my TV from my motel hideaway. That first Christmas I plopped a two-foot plastic tree atop a table and decorated it with home-crafted ornaments (it didn't require many). We inherited a console stereo, which claimed one wall of the living room and after work I spun Emmylou Harris's Elite Hotel (loved that album) and one by someone named LaCosta, who it turned out was Tanya Tucker's sister.

The communal radio at work was tuned to rock, so I still had one foot in that world. Sundown, Goodbye Yellow Brick Road, and Mockingbird were the order of the day.

(Not to state the obvious, James, but those drugs seem to really be kicking in.)

My first son was born in November of 1976. I worked up until his birth, albeit not at that soul-sucking job I'd landed right out of high school. Truly, that place was yet one more dysfunctional family, but I wasn't tied to them by blood, so I bailed. Where did I go? Well, shoot, back to Mom and Dad. In my defense, however, Dad was newly sober and had become an actual human being, and thus my mom was ninety per cent less frenzied.

Once I delivered my son, however, I retired. I loved it. Achingly poor, yet happy. I knew it couldn't last, but I was willing to forego a Country Kitchen breakfast and a couple of new LP's if it meant watching my baby grow. Anyway, I still had the radio:

And I hadn't abandoned country completely.
(although this is kind of skirting the country line)
(whereas this is definitely country)

In March of '78 when I became pregnant for the second time, we traded up to a fourteen by seventy-eight-foot mobile home with three bedrooms. Those extra two feet wide, boy, felt like a palace, Still a tin palace that sounded like Armageddon during a hailstorm

In December I gave birth to my second son and I knew my mom-time was fast waning.

In rock, nothing much struck me. This track was considered "rock", but come on. It's Roy Orbison dressed up in a new package:

I dipped my toe back into country music, kind of as a farewell to the decade.

In essence, despite all signs to the contrary, I grew up in the seventies. And yes, I did eventually learn how to cook. I also learned how real life works, how to stop apologizing for my talents; how to wrangle two toddlers into a car and motor over to the mall and come out the exit doors sane. How to soothe colic. How to fall in love with an unlovable dog who loved no one but me. How a clothes dryer works so much better if one occasionally cleans the lint filter. How linens dried on a fresh-air clothesline smell so delectable. How to coax houseplants to flourish.

How a baby's giggle is manna from heaven.

In ten short years I went from a self-involved, self-pitying victim to an actual grown-up human.

I was the last person to see that coming.