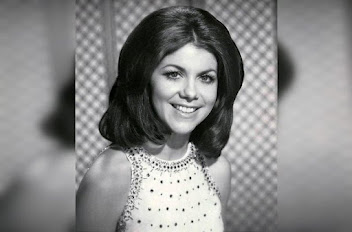 Seriously? And you call yourself a country fan.

If all was right with the world, and had her Capitol producer chose better songs for her, Jody Miller would be enthroned in the annals of country music.

Jody first became known for her "answer song" to Roger Miller's King Of The Road, although I don't exactly get how this track answers anything Roger put forward in his hit. The character in Roger's song is a hobo, so unless he's left Jody behind at the bungalow to forge his new lifestyle, describing her life as a housewife isn't exactly the antithesis of a down-and-out vagrant. Nevertheless, the song shot Jody to (short-lived) fame.

(What kind of house was this??)

Jody's next release (that same year, 1965) made the top thirty. This was during my kid rock era (no, not that Kid Rock) and Shindig was my Wednesday night show, but still the dancers doing The Jerk to this seems oddly out of place.

Jody subsequently recorded a string of cover songs, which is unfortunate, because she had so much more to offer.
Although I like her version of this:
When she moved to Epic Records in 1970 Producer Billy Sherrill at last broke the mold (after a couple more covers), and this is my favorite Jody Miller track:
To understand Jody, what could be better than her own words? She had a young life not unlike mine, minus the fame part. 🙄 She became a born-again Christian in 1993, long after a wildly successful string of TV appearances with the likes of The Rolling Stones and The Righteous Brothers, and long after touring with The Beach Boys. Long after her foray into country with Billy Sherrill helming the Epic ship.

In 1972 Jody recorded a duet with Johnny Paycheck of Let's All Go Down To The River. Unfortunately, no live performance video can be found, if there ever was one, but I do chuckle at the pairing. That said, this is another one I like:

Jody left the world on October 6, in Blanchard, Oklahoma; a mom and a grandmom, which is no doubt how she'd want to be remembered.

I will remember her as one helluva singer.