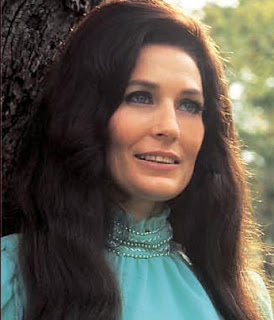 "If you're citing The Pill as an iconic Loretta Lynn song, you're not an actual fan."

Newspaper obituary writers tend to mold a legendary figure into the imaginary image they wish them to be. Face it, journalists situated in New York and Washington, DC are not country music fans. They're probably twenty-somethings dreaming of journalistic fame and instead they're stuck on the obituary beat. One can't be twenty-three and understand Loretta Lynn.

So I'll describe her as I saw her.

Loretta was more or less of my mother's generation, and no, those women were not "liberated", whatever that means. They were plain-spoken and they worried about everyday life -- their kids, their no-good carousing husbands, how they were going to pay this month's bills. They cooked, mopped, canned vegetables, hung clothes on the line, pulled weeds from the garden. Liberation was something that happened at the end of World War II. These women were pragmatic.

If you've ever seen Coal Miner's Daughter, you know it sure wasn't Loretta's idea to get into show business. If Doolittle hadn't pushed her to do it, she would have carried on as she always had.

Girl singers, as they were called then, weren't exactly setting the country music world on fire. Before Loretta, there was truly only one female country star, Patsy Cline, and Patsy's recordings were defined by silky-smooth production --- Country Lite™. Don't get me wrong; her singles were great. They just weren't hard-core country. Sure, there were other female artists who had hits here and there. Kitty Wells was big for her time, but only in country music circles. Jeannie Seely, Dottie West, and Jean Shepard each had at least one number one single, but even I didn't know their names when I first heard Loretta.

I think the first time I heard that voice was on my Uncle Howard's jukebox, when I was temporarily living one door away from his bar with two of my cousins and my own mom and my cousins' mom, who took turns managing my uncle's restaurant.

During weekend morning hours before the bar opened, we lolled about on swiveling bar stools and breathed in the remnants of stale cigarettes and the pungent aroma of empty beer cans littering his overflowing trash cans.

Uncle Howard tapped his cash register and handed us "red quarters", quarters with a red stripe painted across them that he used to feed the jukebox. My cousin Karen and I were into rock 'n roll, but the jukebox's selections in that field were limited, so we just pushed buttons and ended up with tracks from Bobby Bare and Roger Miller and mostly Buck Owens -- lots and lots of Buck Owens. I think there was only one female country artist contained within, so I heard this:

And this:
I can't say that nine-year-old me was all that impressed. It wasn't "my deal". I liked Roy Orbison's Pretty Woman and Manfred Mann's Doo Wah Diddy. I will say that her voice really jumped out of the jukebox, though.

But this Loretta kept showing up in my young life, whether I wanted her to or not. That September my sister got married in Fort Worth, Texas, and as part of the week-long celebration my new brother-in-law escorted us to Panther Hall, where guess who was the featured band? Yep, between bites of icky steak and lettuce salad sans dressing (I was a very picky eater) our party was entertained by the likes of Loretta Lynn and her band, which featured her albino-like brother, Jay Lee Webb. Somehow someone (not me!) secured Loretta's autograph and we passed it around at the table. I commented that it appeared to read, "Buffalo Lynn". I think I called her that for a long time afterward.

And that was before she even scored her biggest hits.

I will admit I liked this one:

My parents didn't buy records. They owned exactly two LP's and neither of them were by Loretta Lynn. But our local radio station, not country, not rock 'n roll; just a "radio station", sure wore out the grooves of those two singles. In my innocence, I didn't exactly know the subject matter of them, but I secretly kind of did. I certainly understood the "drinkin'" one.

1967 was the year I fully committed to country, solely because I wanted to fit in with my new best friend. Left to my own devices, I would have blithely carried on with The Hollies and The Turtles, but nevertheless, once I committed I never looked back. Granted, I had a lot of catching up to do, but one can never say I didn't know who Loretta Lynn was. I bought her albums, but then, I bought a lot of albums. I remember these two in particular: 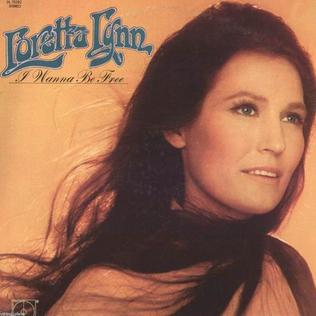 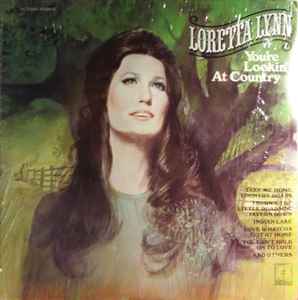 These are my favorites from those LP's:

Loretta also recorded a couple of songs that made me cringe a bit, one being Your Squaw Is On The Warpath; and Fist City seemed a bit unladylike, though I would listen to the second one before I'd ever hit "play" on the first.

My mom and I went to see Coal Miner's Daughter together, and I might have henceforth confused cinema with reality. Tommy Lee Jones was a redheaded hunk, whereas Doolittle Lynn was a puny little guy, but Loretta loved him. And Sissy Spacek wasn't a powerful singer like Loretta, but no other actor of that time could have come close to capturing the real woman. As for the title track, I was never in love with it. I found it repetitive, and it was hard to move past the hayseed pronunciations (no offense to hayseeds).

Well, I was borned a coal miner's daughter

Mommy scrubbed our clothes on a warshboard every day

At night we'd sleep cuz we were tarred

Had it not been for the key change halfway through, the song would have died a merciful death.

And let's finally address "The Pill". It was pedantic and cringey. Every thought doesn't need to be expressed. But kudos, I guess. Contrary to the dearest wishes of obituary writers everywhere, it will be but a blip in history.

Around 1971 I was sitting in my mom's kitchen when a new duet exploded out of her portable radio. I cocked my ear, confused at first, my trained country ear flummoxed. Soon enough, though, I realized who the singers were. And I knew this was an instant classic.

So here's the deal about Loretta -- she wrote almost every damn song she recorded. She was who she was; and she didn't give a crap whether you approved or didn't.

She had a voice that bullied its way out of a jukebox or a car radio, and terrorized your phonograph needle.

You will never forget her.